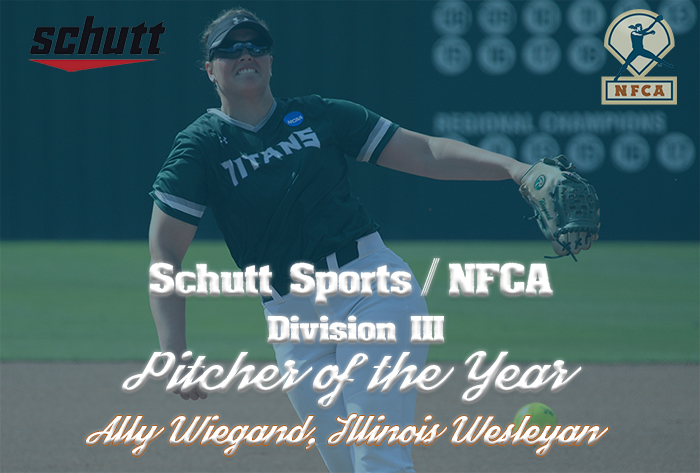 LOUISVILLE, Ky. — The NFCA is pleased to announce that Illinois Wesleyan University junior right-hander Ally Wiegand has been chosen as the inaugural 2019 Schutt Sports/NFCA Division III National Pitcher of the Year.

Wiegand, who led the nation in earned-run average (0.50), fewest hits allowed per game (3.06), and strikeout-to-walk ratio (32.5) this season, earned her second-straight NFCA All-America and All-Region selections earlier this month. She also earned 2019 College Conference of Illinois and Wisconsin Pitcher of the Year honors and her second-straight All-CCIW selection.

Among very impressive numbers, her most impressive statistic this season was probably her strikeout-to-walk ratio. She struck out 260 batters and walked only eight, which means for every walk she allowed, she struck out 32.5 batters. That number nearly twice the ratio of the next person in the NCAA Division III rankings.

For the season, Wiegand was 23-4 with 10 shutouts, four saves, just 81 hits and 13 earned runs allowed over 183 innings in the circle. She limited opposing batters to a .132 batting average.

She helped lead the Titans to their fourth consecutive NCAA championship finals last week in Tyler, Texas, by winning two games to earn Most Outstanding Pitcher honors in their NCAA super regional victory over Carthage. Prior to that, Wiegand was the Most Outstanding Player of the NCAA regional they hosted on their home field.

This season, the Schutt Sports/NFCA Player of the Year award, which has been presented since 2016, was split into two honors, to allow recognition of a player and a pitcher in the NFCA’s member divisions. Both honorees are chosen from a list of 10 finalists announced just before the NCAA championship finals.

The Schutt Sports/NFCA Division III National Player and Pitcher of the Year award recipients are selected by NFCA’s All-American Committee, which includes a representative from each of the eight NCAA Division III regions.

2019 — Mackenzie Chitwood, 1B, University of Lynchburg