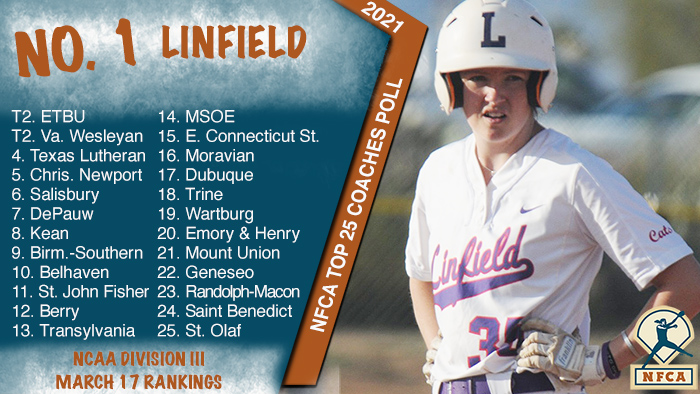 LOUISVILLE, Ky. — Linfield swept a four-game series with Pacific over the weekend to extend its win streak to 13 games and take over the top spot in the NFCA Division III Top 25 Coaches Poll.

The (15-1) Wildcats passed East Texas Baptist and Virginia Wesleyan — who both lost — to move up two places from third last week. Linfield outscored the Boxers, 43-9, over the four games on 43 hits, though Tayah Kelley and Maddy Podnar didn’t need much run support over the final two contests.

Kelley tossed her first career no-hitter in Sunday’s opening game, while Podnar had a three-hit shutout in the nightcap. Linfield had been ranked sixth the first two weeks of this season and finished the pandemic-shortened 2020 season at No. 7.

Meanwhile, East Texas Baptist (12-1) saw its 27-game unbeaten streak end in the 10th inning of Saturday’s three-game series finale against Hardin-Simmons, but it wasn’t for a lack of performance. The Tigers have amassed 59 hits and 45 runs over their last five games, while allowing just 2.6 runs per contest. East Texas Baptist’s last defeat was a 6-1 loss to eventual national champion Texas Lutheran in the NCAA Regionals on May 12, 2019.

Virginia Wesleyan (16-2-1) had an uncharacteristic 10-1 loss in a doubleheader split with No. 5 Christopher Newport last Wednesday before bouncing back to win three straight. Two-time Schutt Sports/NFCA Division III Player of the Year Hanna Hull allowed 10 walks over 2.1 innings in the first game with the (14-6) Captains before freshman Emily Seale tossed a three-hitter in the Marlins’ 3-1 victory in the nightcap. Virginia Wesleyan steamrolled Guilford on Sunday with Hull allowing just three hits over four innings and Madison Glaubke homering twice in the second game.

The next five spots in the poll remained the same as last week, including No. 6 Salisbury (10-4) winning its eighth straight, and DePauw (14-1) going 6-1 to stay solidly at No. 7, with four victories over ranked schools (two wins apiece against Transylvania and Trine).