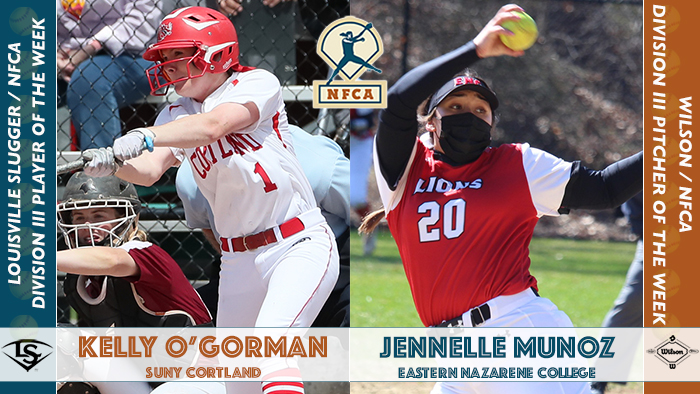 Munoz, a freshman pitcher from Lake Elsinore, Calif., earned New England Collegiate Conference Tournament Most Valuable Player honors after leading the Lions to their second-straight conference crown. The Murrieta Valley High product tossed three complete games in the tournament, allowing no earned runs and fanning 15 batters over 21 innings. She also helped herself at the plate, hitting .429 with two runs batted in.

O’Gorman, meanwhile, gave Cortland its second national honoree in as many weeks, hitting .600 (12-for-20) with three doubles, three homers, a triple, two steals, 11 runs scored and 12 RBI in five games. The Clifton Park, N.Y., native homered twice, including a grand slam, and drove in five runs in a loss to Oswego, then went 8-for-12 in a best-of-three State University of New York semifinal series against Buffalo State. In the decisive third game, O’Gorman was 4-for-4 with a homer, two doubles, four runs and seven RBI.