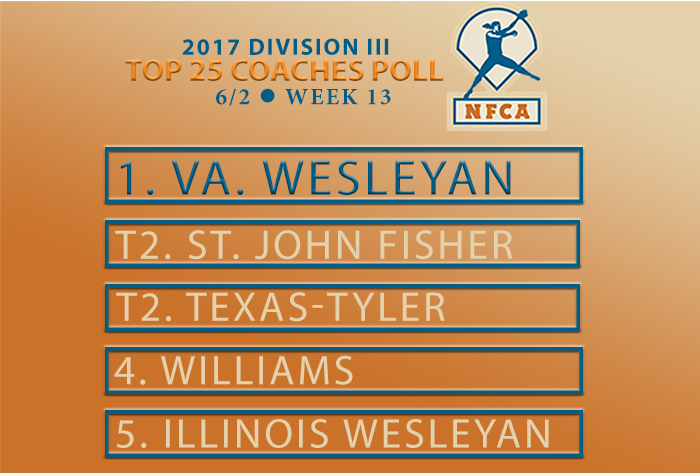 LOUISVILLE, Ky. — National champion Virginia Wesleyan finished the season No. 1 in the NFCA Top 25 softball rankings, remaining in the top spot for a seventh straight week.

The (54-3) Marlins set a Division III record for wins in a season with the second of two straight victories over defending national titlist Texas-Tyler (46-6) on Sunday to reach the best-of-three NCAA Championship Series on Monday at OGE Energy Stadium at the USA Softball Complex in Oklahoma City, where they swept St. John Fisher (44-8) to capture the first national championship in program history.

The Cardinals’ runner-up finish at the NCAA Championship was one spot higher than their third-place showing last year and tied them with Texas-Tyler — who defeated Virginia Wesleyan in the teams’ NCAA Championship opener — for the No. 2 spot in the final Top 25 poll.

The five other teams that advanced to Oklahoma City finished in the top eight, led by No. 4 Williams (38-13), which tied Texas-Tyler for third place, fifth-place finishers Illinois Wesleyan (37-15) and Amherst (34-12) at No. 5 and 6, respectively, and seventh-place finishers St. Catherine (38-14) and Trine (37-10) in slots seven and eight. Both Illinois Wesleyan and Amherst were not ranked in the last poll, which occurred more than three weeks ago, prior to the start of the NCAA Tournament.

East Texas Baptist (38-11), which lost to Texas-Tyler in the Super Regionals, and Texas Lutheran (38-6), which fell to the Patriots in the NCAA Regionals, round out the top 10.