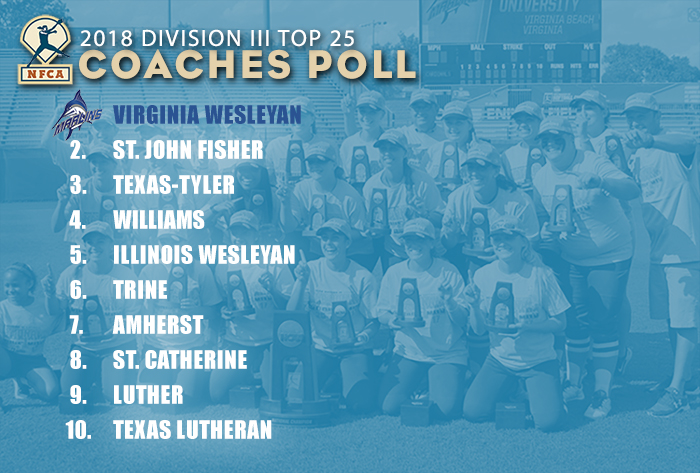 LOUISVILLE, Ky. — Reigning national champion Virginia Wesleyan starts the season right where it left off, as the No. 1 team in the NFCA Division III Top 25 softball rankings.

The Marlins set a Division III record for wins in a season in 2017, going 54-3 en route to their first NCAA Division III crown. Virginia Wesleyan claimed the title with a sweep of St. John Fisher in the best-of-three NCAA Championship Series on May 29 at USA Softball Hall of Fame Stadium – OGE Energy Field in Oklahoma City, after two straight wins the previous day over defending national champ Texas-Tyler.

The national runner-up Cardinals continue in the No. 2 slot in a slightly shuffled top eight composed of the same eight teams from last year’s final poll. Texas-Tyler, which finished tied with St. John Fisher in that ranking, starts 2018 third, while Williams and Illinois Wesleyan, who also advanced to the NCAA Championship site, are fourth and fifth, respectively. Only three points separate places three through five.

Trine, meanwhile, jumps ahead of Amherst and St. Catherine from that final poll, to the No. 6 spot, while Luther and Texas Lutheran round out the top 10.

Two teams receiving votes — No. 19 Berry and Whitworth — have already started their seasons. Berry (2-0) swept Covenant with a pair of run-rule wins on Tuesday, while Whitworth (3-3) split its first three doubleheaders on a three-day road trip at the end of January.

Eighteen of the 34 teams that received votes in this first poll — including NCAA Championship finalists Virginia Wesleyan and St. John Fisher — will compete in the 32-team NFCA Division III Leadoff Classic on March 2-4 in Tucson, Ariz.