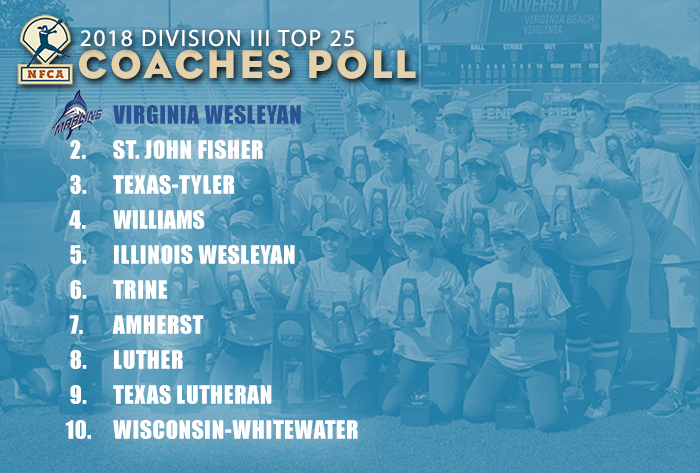 The Marlins set a Division III record for wins in a season in 2017, going 54-3 en route to their first NCAA Division III crown, and have now won 14 straight games. Virginia Wesleyan has been victorious in 20 of its last 21, and has captured 46 of its last 48 contests, dating back to a doubleheader split with Christopher Newport last March.

National runner-up St. John Fisher continues in the No. 2 slot in an unchanged (and unanimous) first seven from the first poll on Feb. 7. Fellow NCAA Championship finalists Texas-Tyler, Williams, Illinois Wesleyan, Trine and Amherst occupy positions three through seven. Among those six schools, only Texas-Tyler has started its season, and the (5-0) Patriots have outscored their opponents by a 51-7 margin.

Luther (2-0) moves up one place to No. 8, followed by Texas Lutheran (2-0), which swept NAIA’s Huston-Tillotson, and Wisconsin-Whitewater, which doesn’t open until March 22, in the top 10. The other NCAA Championship finalist, St. Catherine (2-2), which had started eighth, split its first four games of the season and dropped all the way down to the receiving votes category with Texas-Dallas (0-2), which dropped its first two to fall from the No. 12 spot.

Sixteen of the 34 teams that received votes in this week’s poll — including NCAA Championship finalists Virginia Wesleyan and St. John Fisher — will compete in the 32-team NFCA Division III Leadoff Classic on March 2-4 in Tucson, Ariz.