No change among top four in NFCA Division III rankings 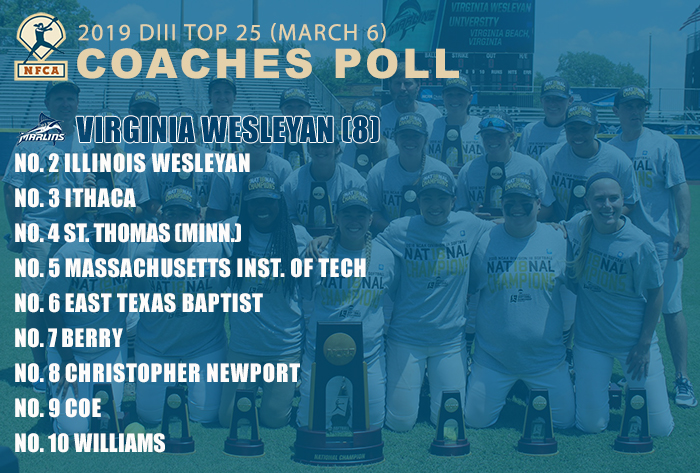 The (5-0) Marlins won three games at the Mountain Mash in Salem, Va., to maintain their unanimous top spot in the coaches’ poll for a 23rd-straight week. They have now won 66 of their last 69 games.

Right behind Virginia Wesleyan is last season’s national runner-up, Illinois Wesleyan, which gets its season going against Catholic next Tuesday at The Spring Games in Florida. Fellow national finalist Ithaca (0-0) continues to be No. 3, while St. Thomas (6-0) won twice on Sunday to remain unbeaten and maintain the fourth spot.

East Texas Baptist (16-0) won four games last week and swept a doubleheader from Oneonta on Tuesday to move up two places to No. 6, just behind Massachusetts Institute of Technology (0-0) in fifth.

New this week is a familiar team to longtime followers of the poll — Claremont-Mudd-Scripps — which is off to a 7-2 start, while Transylvania (2-0) and Wisconsin-Eau Claire (4-0) are the two other new teams at 23rd and 24th, respectively. Salisbury (7-1) and Calvin (0-0) also joined the Top 25 after receiving votes last week.

Dropped out: Southwestern and Texas Lutheran.