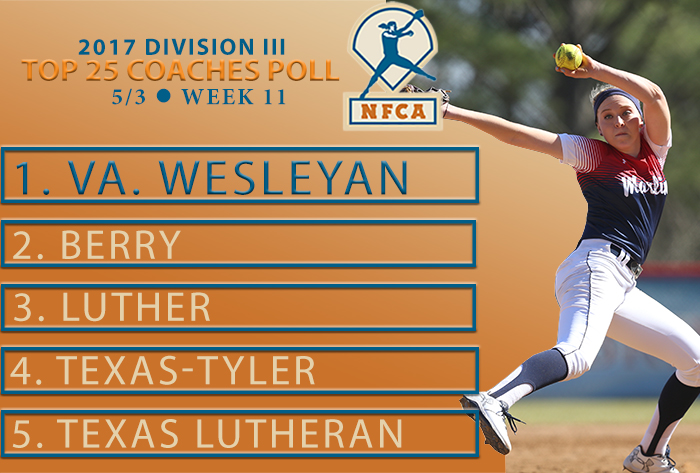 LOUISVILLE, Ky. — Virginia Wesleyan captured its record 10th Old Dominion Athletic Conference (ODAC) title and matched the conference’s mark for most wins in a season to remain the unanimous No. 1 choice in the NFCA Top 25 softball rankings for a fifth straight week.

Berry (38-2) beat Millsaps, 4-2, in the Southern Athletic Association final — which was delayed a week due to inclement weather — to earn that conference’s NCAA bid and move up to No. 2, while Luther (37-3) is the new No. 3 team after wrapping up its regular season with a 4-0 week.

Both jumped past defending national champion Texas-Tyler (39-4), which lost twice to Texas-Dallas (36-8) in the American Southwest Conference (ASC) tournament to fall to fourth in this week’s poll. The first-time ASC champion Comets surged four places to eighth in the rankings after going 4-0 in that tournament to run their win streak to 16.

Texas Lutheran (37-4) stayed fifth after returning to action from a two-week layoff to win its fourth straight Southern Collegiate Athletic Conference title and 37th consecutive game, while St. John Fisher (33-5) won its 16th straight game to remain sixth and Messiah (33-6) moved up one spot to seventh. Wisconsin-Whitewater (33-7) and Central (31-7) both surged four spots off unbeaten weeks to take over the No. 9 and 10 places, respectively.

Elsewhere, Hope (25-11) swept two ranked teams — then-No. 9 Trine and then-No. 23 Alma — and has won five of its last six to join Emory & Henry as schools earning their first votes of the season.

Dropped out: Alma and Kean.