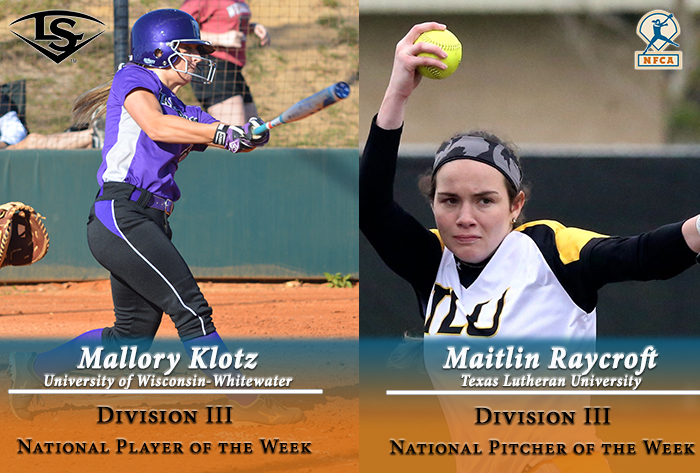 Raycroft, a junior right-hander for the 19th-ranked (22-4) Bulldogs, set the Division III record for no-hitters in a season with her sixth in Sunday’s twinbill nightcap against Austin College. In the first game, she had an one-hitter.

Last Tuesday, the Galveston College transfer tied the NCAA mark held by Tufts’ Allyson Fournier (2015) and Salisbury’s Rachel Johnson (2014) with a perfect game against Mary Hardin-Baylor. For the week, she was 3-0 with one hit (.019 opponent average), two walks allowed and 38 strikeouts. After losing her first two starts, Raycroft tossed six no-hitters over her next nine and had won 10 straight decisions at week’s end.

On Monday, she extended her win streak to 11 straight with an 1-0 victory over Hardin-Simmons, and Texas Lutheran won twice to capture its 22nd consecutive triumph.

Klotz, meanwhile, was brilliant in Wisconsin-Whitewater’s 5-1 week in Florida. The West High graduate batted .750 (12-for-16) for the week for the No. 18 Warhawks, with nine runs scored, four doubles, a triple, two homers and six runs batted in. She had four multi-hit games among the six, including a 4-for-5 performance with three doubles in an 8-1 win over Hendrix last Thursday that wrapped up her team’s spring trip.

The New Berlin, Wis., native had a base hit to center to help Wisconsin-Whitewater erase a three-run deficit in the fifth inning of an 11-9 eight-inning win over Calvin, and was 3-for-3 with a triple and two runs scored in a 7-3 win over Benedictine during the trip.

Wisconsin-Oshkosh senior pitcher Sara Brunlieb went 2-0 with 20 strikeouts and just four runs allowed over 18 innings and three appearances. … Meredith junior third baseman Brittany Bucklin batted .333 (6-for-18) with two doubles, a grand slam and 10 RBI. … Moravian junior pitcher Amanda Carisone went 3-0 including a sweep of Elizabethtown to open Landmark Conference play and recorded her 250th career strikeout. … Meredith freshman pitcher Julia Cerasi had two wins, a save and just three runs allowed over three appearances. … Johnson & Wales junior pitcher Jennifer Corona threw her first career perfect game against Anna Maria, striking out 12 and not allowing a ball to leave the infield, and also picked up a save during the week. … Berry junior outfielder Elisabeth Federici hit .556 with a double, two triples and a homer. … Johnson & Wales senior first baseman Emily Gorecki compiled a 1.500 slugging percentage and a .667 batting average (8-for-12) with four runs, two doubles, a triple and two homers — one a grand slam and the other a game-winner. … Wisconsin-Eau Claire senior center fielder Rachel Heffel was 10-for-22 (.455) with 12 runs and 11 steals in 12 attempts. … Luther junior utility player Bailey Hocker hit .551 and had 13 RBI while reaching base in every game for the Norse. … Berry junior pitcher Kassie Howard earned her 10th win of the season in her team’s 4-0 week, allowing one hit and one run over six innings and two appearances. … Virginia Wesleyan freshman pitcher Hanna Hull continued her dominance of Division III batters, going 3-0 and fanning 39 batters in 20 innings of work. … Massachusetts Institute of Technology junior outfielder Jasmin Joseph was 6-for-10 (.600) with seven walks and seven runs, two triples and three steals from the leadoff spot. … Wisconsin-Oshkosh sophomore first baseman Kaitlyn Krol hit .438 (7-for-16) with six runs, two doubles and five RBI. … Wesley senior catcher Nina Marcano was 8-for-15 (.533) with seven runs, two doubles and a triple. … Otterbein junior utility player Bailey McElwain hit .333 (7-for-21) with four doubles, a triple, homer and nine RBI. … Washington (Mo.) junior pitcher Anna McKee tossed two complete games and struck out 19 over 14 innings, including a career-high 14 against Wartburg. … St. Lawrence freshman pitcher Madison Mitchel had a 5-0 week during which she struck out 38 and also collected a save. … St. Lawrence junior catcher Emma Reakes was 11-for-24 (.485) with nine runs, two doubles, two homers, four walks and six RBI. … Staten Island freshman shortstop Patricia Riches hit .857 (6-for-7) with two doubles, three homers and 12 RBI, including a school-record seven RBI in a win over Lehman. … Lewis & Clark senior pitcher Kalin Rooney fashioned a 1.34 ERA over 15.2 innings. … Geneva sophomore center fielder Haley Sainato was 11-for-13 (.846) with four runs and three RBI from the leadoff spot. … Louisiana College junior pitcher Savannah Settle went 3-0 with two complete games and a win in relief, striking out 30 over 16 innings to increase her American Southwest Conference lead in that category. … Moravian senior outfielder Julie Siragusa batted .500 (10-for-20) with three doubles and six RBI, while hitting safely in all six of her team’s games. … St. John Fisher sophomore outfielder Julia Sortisio was 6-for-8 (.750) with two doubles and a triple. … Washington (Mo.) senior outfielder Janet Taylor hit .500 (6-for-12) with three doubles and six RBI. … Gallaudet junior shortstop Courtney Thomas was 8-for-14 (.571) with nine runs, two doubles, two triples, five steals and seven RBI. … Luther senior pitcher Annie Versnik teamed with Amanda Witzlib on a five-inning no-hitter against Knox and then pitched one of her own the following day against Washington & Jefferson. For the week, she allowed just nine hits and no runs over 28 innings, while playing a part in five shutout victories. … New York University sophomore pitcher Karissa Zubulake pitched two complete games in which she allowed no earned runs.