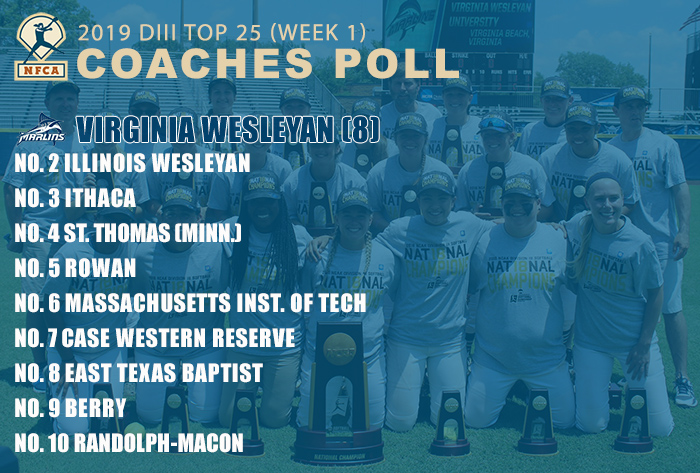 LOUISVILLE, Ky. — Repeat national champion Virginia Wesleyan University has had an unbeaten start to continue its reign as the top-ranked team in the NFCA Division III Top 25.

Like many other teams around the country, the (2-0) Marlins have been battling to get back on the field since scoring 24 runs in a doubleheader shutout of Meredith on Feb. 15. Their last three games have been either cancelled or postponed due to weather.

Virginia Wesleyan broke the Division III record for wins for the second straight season last year, besting their 2017 total by one, finishing 55-3 after defeating Illinois Wesleyan, 3-1, in the finale of the best-of-three NCAA Championship Series on OGE Energy Field on May 29 at the USA Softball Hall of Fame Complex.

Including their 2017 run to their first national championship, the Marlins has now won 63 of their last 66 games, and has been the unanimous top-ranked squad in Division III for 22 straight weeks.

Illinois Wesleyan, which went 40-14-1 last year, remains at No. 2, while fellow national finalists Ithaca (third), Rowan (fifth), Massachusetts Institute of Technology (sixth) and Case Western Reserve (seventh) are all in the top 10, with St. Thomas (4-0) joining them at No. 4.

Elsewhere, East Texas Baptist’s 11-0 start jumped the Tigers all the way from No. 21 to open the season to eighth, while Berry (ninth) and Randolph-Macon (10th) round out the first 10 teams.

Pomona-Pitzer joins the Top 25 at 11th, following a 7-0-1 start that includes a win and tie against 15th-ranked Linfield (2-1-1), which had opened the year at No. 4. Rhodes is the other poll newcomer, having gone 7-1 to begin its season.