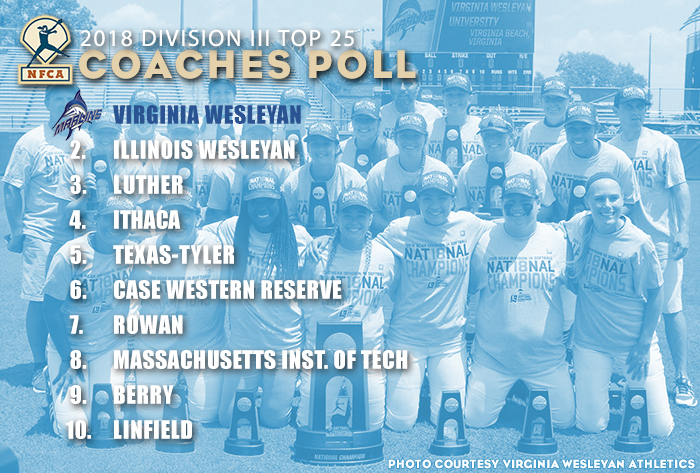 The (55-3) Marlins broke the Division III record for wins for the second straight season, besting their 2017 total by one, after defeating Illinois Wesleyan, 3-1, on Tuesday in the finale of the best-of-three NCAA Championship Series on OGE Energy Field at the USA Softball Hall of Fame Complex.

Including last’s year’s run to its first national championship, Virginia Wesleyan has now won 61 of its last 64 games, and has been the unanimous top-ranked squad in Division III for 20 straight weeks.

The eight teams that advanced to the NCAA Championship in Oklahoma City are the unanimous first eight in the final ranking. Runner-up Illinois Wesleyan is second, third-place finishers Luther and Ithaca are third and fourth, respectively, while fifth-place teams Texas-Tyler and Case Western Reserve, and seventh-place teams Rowan and Massachusetts Institute of Technology round out the first eight.

Case Western, which advanced to its first NCAA Championship finals and qualified for the NCAA tournament for just the second time in school history — and the first time since 2001 — was previously unranked. Wisconsin-Oshkosh is the other new team for the final ranking, while Amherst, Calvin, Emory, Lynchburg, Messiah and Ohio Northern dropped out.