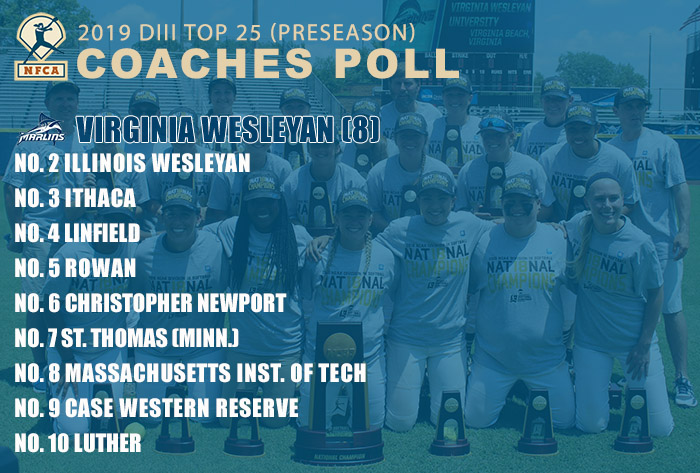 The Marlins broke the Division III record for wins for the second straight season, besting their 2017 total by one, finishing 55-3 after defeating Illinois Wesleyan, 3-1, in the finale of the best-of-three NCAA Championship Series on OGE Energy Field on May 29 at the USA Softball Hall of Fame Complex.

Including its 2017 run to its first national championship, Virginia Wesleyan has now won 61 of its last 64 games, and has been the unanimous top-ranked squad in Division III for 21 straight weeks.

Illinois Wesleyan, which went 40-14-1 last year, opens the year where it finished, at No. 2, while fellow national finalists Ithaca (third), Rowan (fifth), Massachusetts Institute of Technology (eighth), Case Western Reserve (ninth) and Luther (10th) are all in the top 10.

The other team from the 2018 Division III final eight, Texas-Tyler, which is playing a mostly Division III schedule (with no scholarship players yet) before moving to Division II next season, received 15 votes. The Patriots have already played the four Division II opponents on their schedule, winning all four, and will start their final year of American Southwest Conference play (they aren’t eligible for the conference or NCAA tournaments) next Friday with the opener of a three-game series against Hardin-Simmons.

Elsewhere, No. 13 Texas Lutheran and 16th-ranked George Fox tuned up for the season with two games apiece against NAIA opponents, while No. 21 East Texas Baptist opened its season with a 4-1 home victory over Centenary College (La.) on Monday.