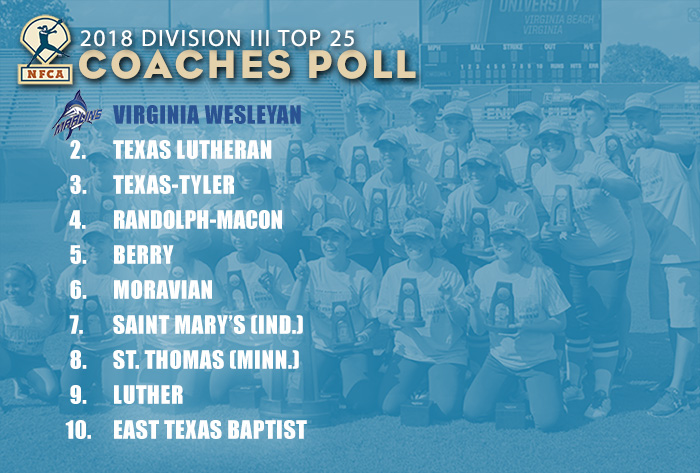 LOUISVILLE, Ky. — Saint Mary’s (Ind.) surged 18 places this week to No. 7 in the NFCA Division III Top 25 rankings, which continues to be led by the trio of undefeated defending national champion Virginia Wesleyan, No. 2 Texas Lutheran and No 3 Texas-Tyler.

The (28-2) Belles matched their school record for wins in a season with Friday’s sweep of then-No. 8 Trine, and also swept then-No. 20 Calvin last Monday in a 6-0 week. Saint Mary’s has now won 13 straight games, and 19 of their last 20, after completing its third-consecutive unbeaten week.

Meanwhile, it was business as usual for the top three teams in the poll. Virginia Wesleyan (34-0) won six more games to extend its win streak to 40 straight, dating to last May’s NCAA Championship in Oklahoma City, while Texas Lutheran (31-1) swept four from Southwestern, and Texas-Tyler (29-1) took three from Texas-Dallas. They have been the undisputed top trio in the rankings for the past seven weeks, and the Marlins have been the unanimous No. 1 team in the nation for the past 16 weeks.

No. 22 North Central and No. 25 William Paterson received enough votes this week to join the first 25, while College of New Jersey, Lake Forest, Ohio Northern, Massachusetts Institute of Technology and Wisconsin-River Falls are the new additions to the list.