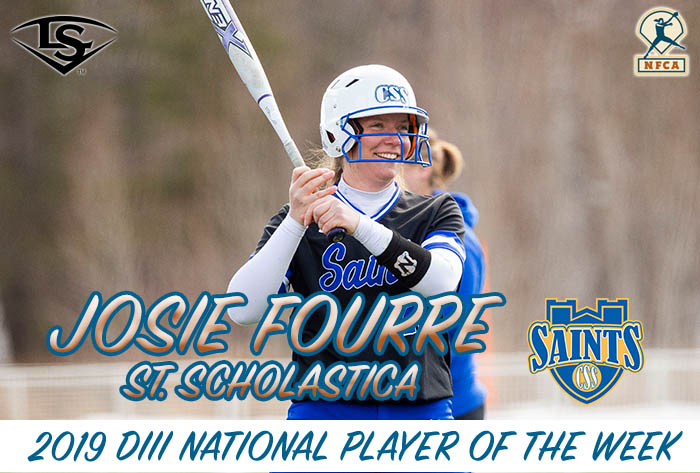 Junior Schaffer tossed four complete-game shutouts, including an 1-0, 10-inning shutout of Becker on Sunday, in which she struck out 16. For the week, the Benton, Pa., native was 4-0 with a 0.00 earned-run average, just two walks and 38 strikeouts over 27 innings in the circle.

Fourre, meanwhile, hit .650 (13-for-20) with 13 runs scored, two triples, six homers, and 17 runs batted in, as the Saints went 7-1 for the week. The sophomore from Albany, Minn., hit the six homers over a four-game stretch against Northland, and her four homers in four straight at-bats tied for second-most consecutive homers in NCAA Division III history.

Rowan senior shortstop Carly Anderson recorded the three-run double that tied the score in the bottom of the seventh, then scored the winning run in a 9-8 victory over Montclair State. …  Eastern Nazarene senior catcher Lauren Clements hit .563 (9-for-16) with four runs, two doubles, two homers and nine RBI, while collecting a hit in all six games she played. … Wesley junior utility player Brandi Dalious helped her team knock off the second and third seeds in their conference tournament, batting .545 with two doubles, three homers, and six RBI. … Lesley sophomore designated player Jordan Day hit .786 with seven runs, two doubles, a triple, and two steals. She also was 1-0 in the circle, with a complete-game, five-hitter and nine strikeouts. … St. Olaf junior pitcher Julie Graf went 3-0 with a 0.39 ERA, and allowed just six hits and two total runs over 18 innings, while striking out 42 and walking only six. She broke her own conference record for strikeouts with 19 last Wednesday against Carleton. … Calvin junior second baseman Hannah Horvath collected seven runs and 11 hits while batting .524 with five RBI, and had four multi-hit games. … Virginia Wesleyan junior pitcher Hanna Hull was 4-1 with a save, four runs allowed, a 0.43 ERA, and 48 strikeouts over 32.2 innings. She twice registered 12 strikeouts, had seven in a 3-2 loss to Randolph-Macon, and eight while winning a rematch with the Yellow Jackets the following day. … Washington and Jefferson senior shortstop Rachel Johnson was 17-for-22 (.773) with seven runs, two doubles, and eight RBI. … East Texas Baptist freshman pitcher Beatriz Lara allowed just two hits over 13.1 innings for the week. She fanned 11 and allowed her lone hit in the seventh in a 6-0 series-opening win over McMurry, then threw 6.1 innings of one-hit relief in the second game against the War Hawks. … Bethany Lutheran sophomore center fielder Morgan Mashlan hit .500 over a six-game stretch and helped lead her team to its first-ever conference crown. … Central (Iowa) sophomore shortstop Darla Parchert had four hits, including three doubles, as the Dutch swept then-No. 13 Luther to claim their first regular-season conference title since 2013. For the week, she hit .562 with six runs, four doubles, a homer and six RBI. … Emmanuel (Mass.) junior outfielder Yuleska Ramirez-Tejeda set a school record for homers in a season (10) and threw out a runner at the plate to help the Saints lock up the top seed for their conference tournament. For the week, she batted .611 (11-for-18) with four homers and 14 RBI. … Kean senior outfielder Caroline Ratti hit .429 with five runs, a double, four homers, three steals and seven RBI. …  Bethany Lutheran junior shortstop Haylee Sobrero batted .526 with a triple and homer as her team set a record for wins and won its conference for the first time. … Calvin sophomore catcher Grace Stock delivered the go-ahead run with a 3-2, two-out double, and hit .500 with three runs, three doubles and 10 RBI for the week.

May 1 — Josie Fourre, College of Saint Scholastica, So., 3B, Albany, Minn.