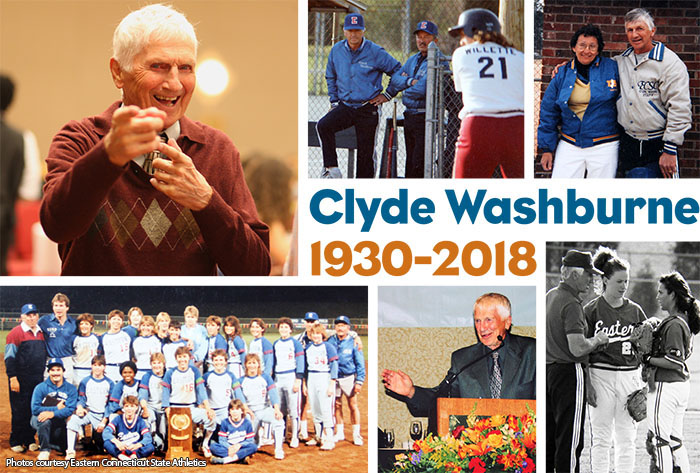 WILLIMANTIC, Conn. — NFCA Hall of Famer Clyde Washburne, who started the Eastern Connecticut State University softball program and was a pioneer in the fight for women’s sports in the 1970s after the passage of Title IX, died Monday at age 87.

Washburne coached three sports over a 23-year coaching career that spanned four decades at Eastern Connecticut State and led the softball squad to four Division III national championships in a six-season span, including back-to-back titles in 1981-82 and 1985-86. In 12 seasons under his leadership, the Warriors were 284-110-1 and averaged nearly 24 wins each year, making seven straight national tournaments.

Eastern Connecticut State captured the Association for Intercollegiate Athletics for Women (AIAW) crown in 1981, then won the first of three NCAA titles under Washburne in 1982. He led the team from 1977-87, then returned for one season in 1993 following the death of his successor and longtime assistant Jeff Anderson.

"Coach Clyde Washburne was a tremendous coach, mentor, and first-class person who won both on the softball field and in the game of life,” NFCA Executive Director Carol Bruggeman said. “We were all blessed to know him, be inspired by him, and learn from him. He gave so much to the softball community and will always be legendary in our sport."

Over the last six seasons of his first stint as head coach, the Warriors averaged 30 victories, playing not only Division III schools, but Division I and II opponents as well. And when the lights shined the brightest, his teams were at their best, going 32-11 in postseason play against teams coached by the game’s best, including NFCA Hall of Famers Sheilah Gulas, June Walker, George Wares and Marge Willadsen.

In fact, when Washburne won his final national championship in 1986, it was Wares’ Central College team that was the national runner-up.

“Coach Clyde was a mentor to me and so many more,” said Wares, the all-time leader in Division III victories, who has won four national titles and been runner-up twice. “The best tribute to him would be to do what he always asked: ‘Pass it on.’ By doing this, he will live in the world of softball forever.”

Gulas, who built a Division III national power at Allegheny College before moving on to more success at Division II Ashland University, said her team often saw Washburne’s team in the postseason.

“My memory of him was always at the Division III championship,” she said. “He always had that sense of humor and he was always playing it cool when (the rest of us) were stressed out with the event and the game. Clyde knew about the value of having your kids relaxed before the rest of us did.”

She said his overly-calm demeanor sometimes rankled other coaches, but not her. Like so many of her colleagues, Gulas developed a long-lasting friendship with Washburne.

“We’d always see him after the championship,” she said.

Last year, after Gulas donated to Eastern Connecticut State’s campaign to name their softball facility for Washburne, he wrote her a note of thanks.

“He sent me a really nice note around Convention,” she said. “He congratulated me on my Hall of Fame induction. That’s the type of guy he was.”

Michigan head coach Carol Hutchins, who has won more NCAA games than anyone in history and was in the same 2006 NFCA Hall of Fame induction class as Washburne, was another of the coaches who stayed close with him through the years.

"Clyde Washburne is regarded as one of our forefathers,” Hutchins said. “He was involved in the game of softball for a very long time, and what he brought to the game was a passion like you had never seen. His love of the sport and all the people in the sport was boundless. That's what I think he'll be remembered for."

“Clyde was a softball inspiration,” she said. “He was always trying to make the Warriors better with his wisdom of the game. He had a huge personality that made you feel part of something bigger than yourself.”

Longtime SUNY Cortland head coach and NFCA Hall of Famer Julie Lenhart called Washburne one of the giants of the game.

“Two of the biggest legends in Division III softball were Clyde Washburne and (Trenton State’s) June Walker,” she said. “Clyde was one of the best teachers. I loved the little twinkle in his eyes. He always expected perfection and accepted nothing but the best.”

Now in her 30th season at Ithaca College, fellow NFCA Hall of Famer Deb Pallozzi told a story from early in her coaching career that summed up Washburne’s personality.

“I was four years into coaching at Ithaca. The year was 1993, and Jeff Anderson had just passed away,” Pallozzi explained. “Jeff had asked Clyde to take the team if anything was to happen – so Clyde coached Eastern Connecticut that year.”

“Well, it was my very first year serving on the NCAA selection committee as the Northeast chair. The overall chair gave me her number just in case I needed help. Well, long story short, both Eastern and Trenton had been to every NCAA Division III Championship since the NCAA took over women’s programs, and now they were at the same site, so someone wasn’t going.”

“So, here I am being the site rep at Eastern, with both Clyde and June (Walker) being very unhappy,” she continued. “We had a breakfast for the teams the morning of the tournament, and I was asked to say a few words. I was tremendously uncomfortable to say the least, since Clyde just got done telling everyone — the way only Clyde could do it — the travesty that was made for this site and these two teams! And, of course, he had his twinkle in his eyes – truly testing the new rookie (me) on the scene.”

“For me, Clyde is Division III softball, and set the tone for our brand of play. He challenged you and taught you and made you think outside the box. I loved talking to him and always seeing that twinkle he always had. We are all blessed to have someone that impacted lives as much as Clyde did.”