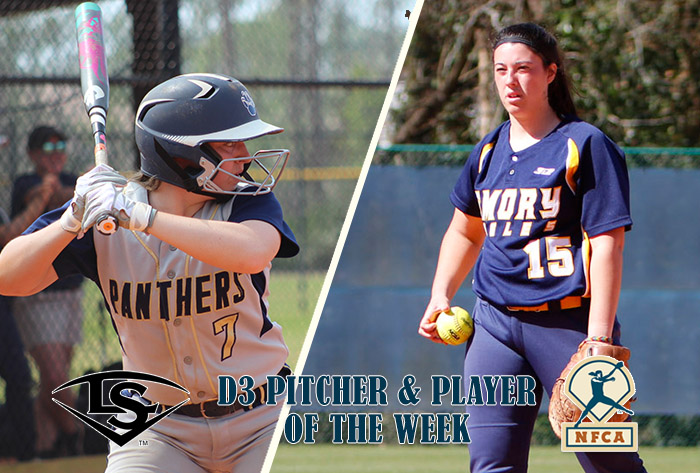 Freshman right-hander Spizizen collected three of surging Emory’s four wins in a road series sweep of Washington University, allowing just one unearned run in 17 innings, striking out 13 and walking one. The West Bloomfield, Mich., native appeared in all four games, as the (17-7) Eagles recorded their 10th straight win to return to the NFCA rankings this week at No. 25. Washington hitters managed just an .136 average against Spizizen for the four games.

Sophomore center fielder East, meanwhile, went 5-for-5 and reached base in all seven of her plate appearances in limited action due to the weather, with a double, triple, six runs batted in, three runs, three steals, a walk and one hit by pitch. The Milton High graduate had three RBI in both ends of the Panthers’ doubleheader sweep of Alfred State.

Bethany Lutheran freshman left fielder Eden Ambrose went 4-for-6 (.667) with a double and four RBI. … Central (Iowa) senior pitcher Annie DeVries needed just 69 pitches to complete a two-hit shutout of Simpson. … Suffolk junior pitcher/utility player Jaclyn Flint batted .667 (4-for-6) with a double, triple and four RBI. … Suffolk senior pitcher Taylor Holmes fanned seven in a two-hit shutout of Norwich. … Berry senior pitcher Kassie Howard led a three-game sweep of Birmingham-Southern by going 2-0 with a save, while striking out 18 over 13.1 innings. … Randolph-Macon senior first baseman Harley Jones hit the game-tying, three-run homer in the sixth inning of a game the Yellow Jackets eventually won 7-6 in nine innings. … La Verne freshman pitcher Jiana Rojo struck out six in her first career no-hitter against Chapman … Berry freshman right fielder Brooke Whittemore hit .429 (3-for-7) with three runs, a double and a triple. … Randolph-Macon junior pitcher Candace Whittemore did not allow a walk and yielded just nine hits over 14 innings in a sweep of then-No. 25 Emory & Henry. She had 12 of her 17 strikeouts for the week in a four-hit shutout of the Wasps.