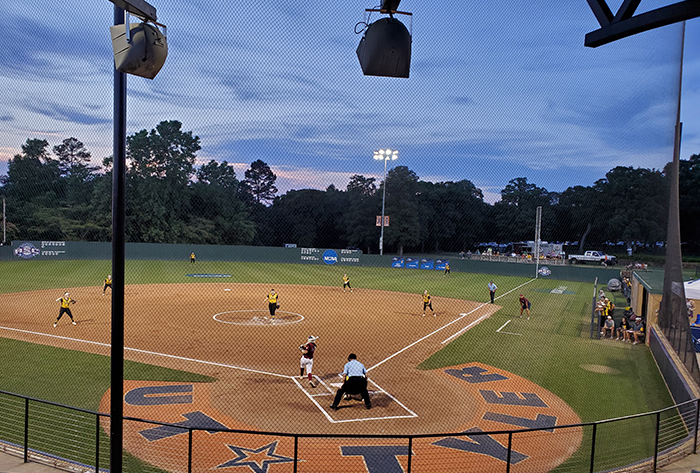 TYLER, Texas — Kassie Maddox drove in two runs and scored two others, as fourth-seeded Texas Lutheran University earned a day off Saturday with a 7-6 winner’s bracket victory over Eastern Connecticut State to close the second day of the NCAA Division III softball championship on Friday at Suddenlink Field.

With two wins, the (37-8) Bulldogs won’t have to play again until 1 p.m. ET Sunday against the victor of Saturday’s 2 p.m. elimination game between Williams and Trine. Emory collected the other bye earlier in the day with a 2-1 triumph over Trine, and will await the winner of Saturday’s 4:30 p.m. Eastern-Illinois Wesleyan matchup.

But Texas Lutheran really had to earn it, as the (35-12) Warriors scored three times in the bottom of the seventh to make things interesting.

Eastern sent eight batters to the plate in the frame to get within a run of the lead, as NFCA All-America pitcher Morgan Bolduk helped her team’s cause at the plate after a rare disappointing night in the circle by driving home the Warriors’ sixth run with a single. Sabrina LeMere doubled and Morgan Sanson singled in the other two runs in the final inning.

Meanwhile, Texas Lutheran scored six of its seven runs in the second and third. It was Kassie Maddox’s insurance run in the sixth, though, that proved to be the difference.

In the third, Maddox followed Chassetty Raines’ go-ahead triple with an RBI double for the Bulldogs’ sixth run. She had just tripled in Raines in the previous inning for her team’s first run. A fielder’s choice plated Maddox, and Casey Martin’s single brought in the third run in the second.

No. 8 seed Eastern got on the scoreboard first with three runs in the bottom of the first. Brooke Matyasovsky singled home the first run and Julia SanGiovanni followed with a double to plate the second. Sabrina LeMere drove in the final run with a single.

Bolduk allowed eight hits and six runs in just 2.1 innings for Eastern on Friday, after tossing a three-hitter in a 2-1 upset of top seed St. Thomas in Thursday’s opening game.

Mara Kipnis’ single to center in the bottom of the 11th scored Casey Pelz with the winning run, as the Ephs stayed alive by eliminating the Tommies.

Pelz was the first of two straight walks allowed by workhorse NFCA All-America pitcher Kirstin Anderson-Glass in the final inning, who finally yielded to teammate Kendall Hopkins after 141 pitches and 84 strikes.

Jill Jenkin moved both runners up on a bunt, and, after Kristina Alvarado walked, Isabelle Marketon took over for Hopkins in the circle, allowing Kipnis’ game-winner.

St. Thomas (43-7) had taken a quick 2-0 advantage in the top of the first on three straight hits. NFCA All-America second baseman Melissa Barry led off the game with a single, followed by a Kristin McGonigal double and an Elise Barnes single.

Williams finally broke through against Anderson-Glass and the Tommies in the third, on Jessica Kim’s solo homer to center.

The fifth-seeded (39-6) Ephs tied the game in the fifth on Rebecca Duncan’s two-out single to right center to plate Kipnis, who had opened the frame with a hit.

Each team worked out of trouble in the seventh, and Williams escaped trouble again in the eighth, before 1-2-3 innings for both squads over five of the next six half innings.

Mattie Ryan hit a two-run homer to left in the top of the fourth, as the Eagles overcame an early 1-0 deficit and earned a day off Saturday with a triumph over the Thunder.

That was more than enough offense for Madison Schaefer, who tossed a complete-game, three-hitter for Emory (38-12).

Trine (36-7) jumped out to a quick lead in the bottom of the first on Ashley Swartout’s double that plated Makenna Hartline, who had singled and was sacrificed to second.

Kate Saupe and Hannah Kampmann were nearly as stingy in the circle as Schaefer for the Thunder, limiting Emory to a combined four hits in a losing effort.

The second-seeded Titans scored three runs in the top of the first and two more in the fifth to knock out the Yellow Jackets.

Kerstin Roth doubled home two runs for Randolph-Macon (30-17) in the second, while Ali Celiberti drove in the other run with a single in the fifth. Candace Whittemore fanned four in the loss.