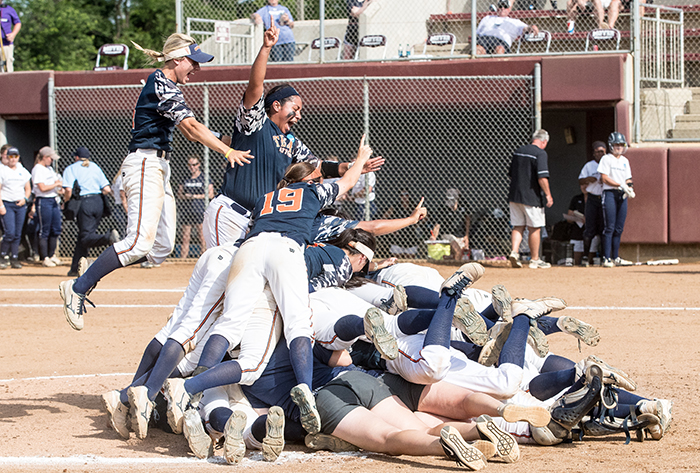 LOUISVILLE, Ky. — The University of Texas at Tyler finished where it started and spent 10 weeks this season — as the top-ranked team in the NFCA Division III Top 25 poll.

The (49-5) Patriots captured their first softball national championship with a sweep of 2009 titlist Messiah College in a May 30 championship series twinbill at the James I. Moyer Sports Complex in Salem, Va. The wins avenged a loss to three-time reigning champ Tufts in last year’s championship series on the same field.

Schutt Sports/NFCA Division III National Player of the Year and four-time NFCA All-America pitcher Kelsie Batten was the tournament’s Most Outstanding Player, going 4-1 with a 0.41 ERA, 18 hits, two runs and four walks while fanning 38 batters over 34 innings in Salem.

In March, Texas-Tyler captured the NFCA Leadoff Classic at the South Commons Complex in Columbus, Ga., and had just a few hiccups all season en route to NCAA Regional and Super Regional. The Patriots dropped two games in February to Belhaven, which is transitioning to Division III from the NAIA and will soon be a league opponent in the American Southwest Conference (ASC). Texas-Tyler’s other two losses before a 1-0 defeat at the hands of sophomore All-America pitcher Lindsey Thayer and St. John Fisher in Salem were to East Texas Baptist over a span of two days in the ASC Tournament, including in the championship.

St. John Fisher’s strong run to the NCAA Championship site, where its only losses were to eventual champion Texas-Tyler, catapulted the (41-12) Cardinals all the way from receiving votes in the last poll on May 11 to a No. 2 final ranking. St. John Fisher went as far as Thayer would take them, which was all the way to a tie for third in the NCAA tournament.

National runner-up Messiah (47-6) was voted third in the final poll after a similarly impressive postseason run. Like St. John Fisher, the Falcons’ two losses at the national finals were both to Texas-Tyler.

The other five teams that advanced to the finals site all finished ranked in the final eight. Sixth-ranked East Texas Baptist (35-10), which lost to the Patriots and No. 10 Texas Lutheran (43-5) in a loaded Tyler Regional, is the only team to break into that group of finalists. Rowan (46-8) finished fourth, while Emory (46-8) was voted fifth, Massachusetts Institute of Technology (34-14) seventh, and Illinois Wesleyan (35-13) and St. Thomas (43-8) tied for eighth.

Luther (40-5), which was previously tied with the Bulldogs at fifth, remained tied — just now five spots lower at 10th. Virginia Wesleyan (38-7), which was ranked No. 1 for the previous two polls but was upset along with then-No. 2 Salisbury in the same NCAA Regional, fell 11 spots to No. 12, while the (37-6) Sea Gulls dropped all the way from second to 15th.