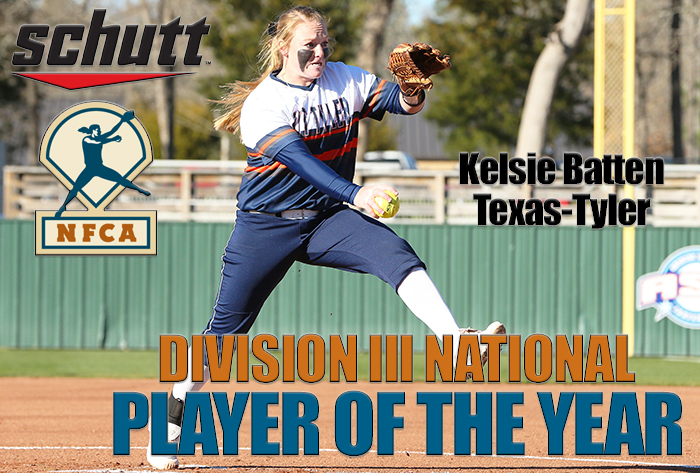 LOUISVILLE, Ky. — The National Fastpitch Coaches Association is pleased to announce that University of Texas at Tyler senior pitcher Kelsie Batten has been named the inaugural winner of the Schutt Sports/NFCA Division III National Player of the Year award.

Earlier this week, the Huntington, Texas, native earned NCAA Championship Most Outstanding Player honors for leading the Patriots to their first Division III softball national championship at the James I. Moyer Sports Complex in Salem, Va.

Batten was a four-time NFCA All-American, recording 118 wins, which is just four short of the Division III career record of 124 posted by Coast Guard’s Hayley Feindel from 2009-12. Her 36 victories this season tied DePauw’s Megan Soultz’s 2008 total for the fourth-most in a Division III season, and were just four short of the 40 that Jennifer Segner had for Muskingum in 2000.

This was the second straight season Batten competed for a national championship in Salem, after leading the Patriots to the championship series against 2009 titlist Messiah College, following their loss to three-time champion Tufts University in the finals last year. She had a career-high 10 strikeouts in the opening game of the best-of-three series against Messiah and then pitched 2.2 innings of scoreless relief in the decisive second game.

Rowan University senior shortstop Shilah Snead and St. John Fisher College sophomore pitcher Lindsey Thayer were the other two finalists for the Schutt Sports/NFCA Division III National Player of the Year. All three players helped their teams be one of the eight squads that advanced to the NCAA Division III Championship in Salem.

All three players were in the initial watch list group of 50 at the start of the season and remained on the list through cuts to 25 and 10 finalists, respectively. The list was a collaborative effort between the NFCA’s Division III Head Coaches and All-America committees.

Schutt Sports and the NFCA also presented a Division III National Freshman of the Year award for the first time this season, with that award going last Wednesday to Virginia Wesleyan College pitcher Kandis Kresinske.