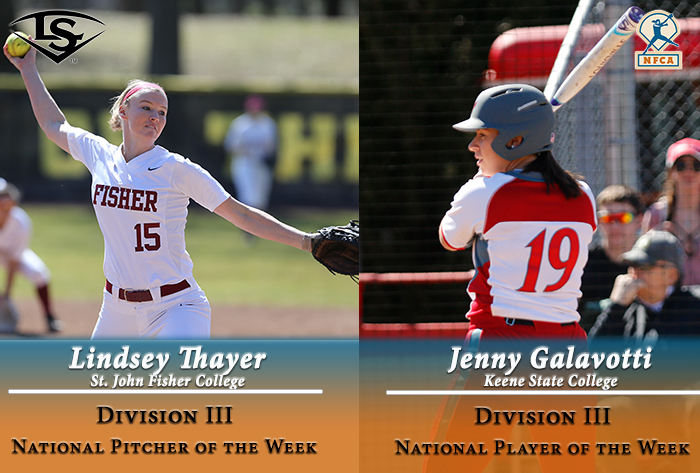 Junior right-hander Thayer is the national leader in strikeouts per seven innings (13.0) and ranks second in Division III in hits allowed per seven innings (2.4) and third in total strikeouts (179). Last week, the St. Lawrence High product was 2-0 in two games, with 20 strikeouts and just one walk and four hits allowed over 13 innings. She tossed a two-hitter in a 3-1 win versus then-No. 22 Cortland (now tied for 18th) and followed that up with another two-hitter in an 8-0 six-inning triumph over Houghton. Then on Tuesday, she fanned 18 batters in a no-hitter against Keuka.

Senior designated player Galavotti, meanwhile, homered twice in the same inning in a 10-9 victory over Westfield State and batted .500 (11-for-22) in a 4-0 week for the Owls. The Marion, Mass., native also had eight runs scored, eight runs batted in, a pair of doubles and another homer. She homered again on Monday against Castleton, giving her 22 home runs for her career, which ranks third in program history.