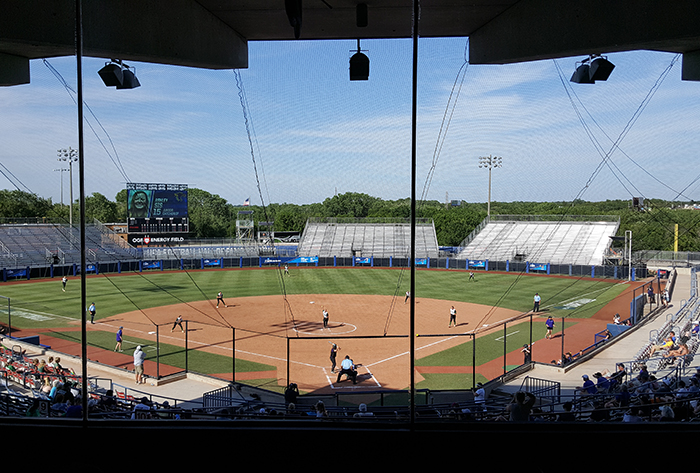 OKLAHOMA CITY — Lindsey Thayer continued her dominance of Division III batters with a 2-0 no-hit shutout of Williams College in Thursday’s Day 1 finale of the NCAA Championship at OGE Energy Stadium at the USA Softball Complex.

Thayer struck out 11 and walked one, facing just one batter over the minimum for the (42-6) Cardinals, who finished tied for third at the NCAA Championship last season to advance to Friday’s 5 p.m. ET matchup against Illinois Wesleyan, which defeated St. Catherine in its opener.

Ashley Prince doubled and scored one of St. John Fisher’s two runs, while Julie Sortisio scored the other and Sarah Kubik drove in both, with a groundout in the first and a single in the sixth.

Mackenzie Murphy and Rebecca Duncan combined to limit the Cardinals to just four hits for Williams (36-12).

The (45-4) Patriots opened their title defense with a win over the current No. 1-ranked team in Division III.

Homers by Cheyenne Thompson and Whitney Romero and a triple by Kaylee Prather helped put Texas-Tyler up 3-0 after the first four innings against Marlins’ ace Hanna Hull, who struck out eight over six innings. Thompson led off the sixth with a hit and later scored on Mel Hinojosa’s

Kiersten Richardson doubled and scored after a groundout on Cassetty Howerin’s double to account for the (48-3) Marlins’ lone run.

Texas-Tyler will face Amherst, who held off Trine, 4-3, in eight innings on Thursday, in Friday’s 7:30 p.m. ET nightcap, while Virginia Wesleyan faces Trine in the Championship’s first elimination bracket game at noon ET.

In the opening game on day 1, Amherst (34-10) scored four runs in the top of the eighth to break a scoreless tie and then stopped Trine’s rally short to advance to a Friday night winner’s bracket matchup. Julia Turner’s highlight catch in right center for the second out after the (37-9) Thunder had already plated three runs to get within a run of Amherst loomed large, as Erica Robles followed with a bunt single and stole second. But she was stranded there on Emily White’s game-ending popup to second.

The (37-13) Titans scored all its runs over the first three innings and Mackenzie Marquis scattered five hits in the victory.

Jillian Runyon singled, doubled and scored three runs for Illinois Wesleyan, which got three hits (including a triple) and three RBI from Sam Berghoff and two hits apiece from Julie Josten and Stephanie Prentice.