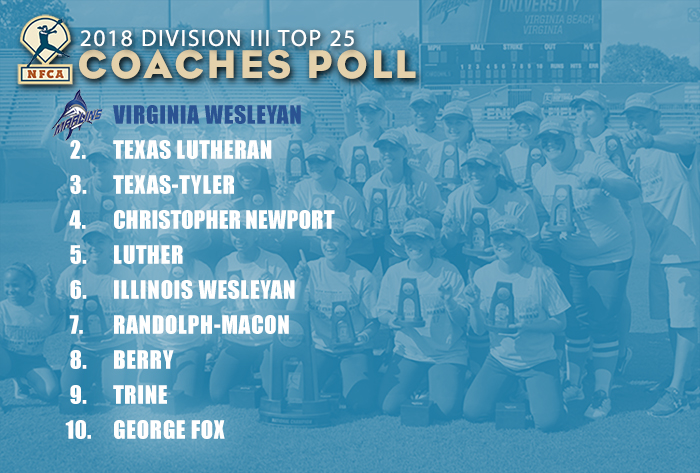 The (26-0) Marlins won six games last week to remain unbeaten over their last 32 games, going back to a 4-1 loss to then-reigning Division III titlist Texas-Tyler last May 25 at the NCAA Championship in Oklahoma City. Virginia Wesleyan has been the unanimous No. 1 team in the Top 25 for 14 straight weeks — a complete year — since the eighth ranking of last season on April 5.

Texas Lutheran (27-1), which has won 20 straight since a 5-0 loss to the Marlins on March 4 at the NFCA Leadoff Classic in Tucson, Ariz., and Texas-Tyler (23-1), which has won 16 consecutive games, continue to roll past opponents. The Bulldogs outscored Schreiner, 31-3, in their four-game conference series, while Texas-Tyler didn’t allow any runs and scored 45 in three run-rule shortened games versus Howard Payne.

Christopher Newport (17-3) has been similarly impressive, outscoring its opponents, 30-3, last week to gain three spots and take over the No. 4 position, while Luther (19-1) also surged three places to round out the top five. The biggest gainers, though, were No. 15 Kean (seven places) and No. 14 St. Thomas (six).

Elsewhere, Calvin (15-2) joins the poll for the first time this season in a 20th-place tie with Babson, while Emory and Henry (21-3) is back in the mix at No. 25 after failing to receive votes last week. Case Western Reserve, Wisconsin-Oshkosh and Wisconsin-Whitewater all dropped out.