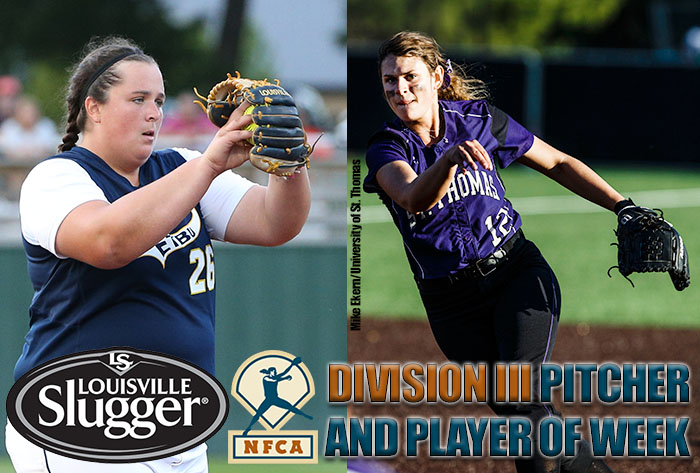 LOUISVILLE, Ky. — The University of St. Thomas’ Micaela Trainor and East Texas Baptist’s Kelly Jo McLendon have been selected as the Louisville Slugger/NFCA Division III National Player and Pitcher of the Week, respectively.

Trainor, a senior third baseman from Winona, Minn., batted .565 (13-for-23) last week for the 12th-ranked (35-5) Tommies. The Cotter High product scored five runs and had a walk, two doubles, three homers and 14 RBI in a 6-0 week that helped secure the Minnesota Intercollegiate Athletic Conference regular-season title and No. 1 seed for the conference tournament. She has an 11-game hit streak and compiled an 1.043 slugging percentage for the week.

Senior right-hander McLendon, meanwhile, beat No. 1 Texas-Tyler twice in a 3-0 week that propelled the (34-8) Tigers to the American Southwest Conference (ASC) Tournament championship and moved them up nine places in the rankings to No. 8, while dropping the Patriots out of the top spot and ending their 33-game win streak. The Livingston (Texas) High graduate had two complete games among her three starts, allowing seven walks and striking out nine to earn ASC Tournament Most Valuable Player honors.

Gwynedd Mercy sophomore infielder/outfielder Jessica Behr batted .545 (12-for-22) with eight runs, two homers, one walk, a hit by pitch and 11 RBI. … Immaculata freshman pitcher Jessica Bormann was 3-0 for the week over five appearances with three complete games (three starts), a shutout, a save, no walks and nine strikeouts over 21 innings. … Stevenson junior catcher Naomi Fields was 7-for-12 (.583) including 4-for-5 in a must-win doubleheader against Albright that Stevenson swept. … Virginia Wesleyan sophomore first baseman Cassetty Howerin hit .583 (7-for-12) with eight runs, three doubles and five RBI despite being intentionally walked six times. She went 3-for-3 with four runs and three walks, and scored the winning run in the ninth inning of the championship game en route to Old Dominion Athletic Conference Tournament Most Outstanding Player honors. … New York University freshman pitcher Diana King was 2-0 for the week with an 1.27 ERA, eight hits, nine walks and 11 strikeouts over 11 innings. She did not allow a run in leading the Violets to two of their six wins. … New York University freshman outfielder Ashley Mains was 8-for-11 (.727) with six runs, a double, two triples, a homer, two steals and nine RBI. … D’Youville senior pitcher Kalie McHenry was 3-1 for the week with one earned run, four walks and 17 strikeouts over 27 innings. She tossed a six-inning one-hitter and a seven-inning two-hitter in two games against Hilbert and helped herself at the plate with a .455 average. … D’Youville senior catcher Lydia Monin batted .500 (6-for-12) with five runs, two doubles, two homers and five RBI. Her first homer was her first career homer and her second homer was her 100th career hit. …East Texas Baptist senior designated player Alexis Padilla was 5-for-9 (.556) with a run, a homer, two walks and three RBI. Her three-run homer in the first inning of the Tigers’ first ASC Tournament game against Texas-Tyler extended their lead over the nation’s top-ranked team to 4-0 en route to a 6-1 victory. … Penn State Berks freshman pitcher Jessica Rozick pitched a perfect game in an 11-0 conference win over Gallaudet and tossed a two-hitter in a win over Wilson. For the week, she compiled a 0.62 ERA, allowing two hits, one run and two walks while collecting 14 strikeouts. … Cazenovia sophomore infielder Kelsey Schuette was 13-for-19 (.684) with five runs, five doubles, two homers, 11 RBI, two walks and no strikeouts in 21 plate appearances. She had an extra-base hit in seven of eight games played. … Delaware Valley freshman pitcher Jamie Stefani tossed a pair of complete-game victories over DeSales to finish the season with a school-record 11 wins. … Gettysburg sophomore third baseman Mykaela Twitchell hit .455 (5-for-11) with six runs, three homers, three walks and seven RBI. She set a school record and tied a Centennial Conference mark with three homers in a single game in a loss to Susquehanna. … Manhattanville sophomore first baseman/outfielder Alexis Ventarola was 4-for-5 (.800) with four runs, a homer and three RBI in a doubleheader sweep of Eastern University.