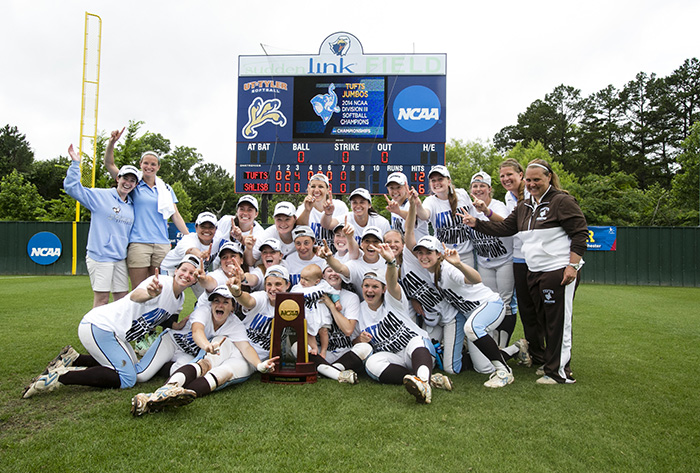 LOUISVILLE, Ky. Head coach Cheryl Milligan and assistants Lauren Ebstein and Emily Beinecke guided top-ranked Tufts to a 13-1 record in the postseason — all on the road —including a 10-1 mark in NCAA tournament play, which was capped by a pair of 6-0 wins over Salisbury in the best-of-3 championship series at Texas-Tyler’s Suddenlink Field.

Milligan, who won 92 percent of her games (47-4 record) in her 11th season at the helm of her alma mater, won her 350th game this year and holds a career mark of 355-112. Under her leadership, the Jumbos have reached the NCAA Championship site in four of the last five seasons and won three straight and six New England Small College Athletic Conference (NESCAC) championships overall. Earlier this season, Milligan won her third consecutive NESCAC Coach of the Year award, which was the seventh of her career.

Tufts is also the New England Region Coaching Staff of the Year recipient for the third consecutive season.

The other seven regional honorees, as voted by the NFCA member coaches in their respective regions, are the following:

The Sea Gulls, led by head coach Margie Knight and assistants Sarah Alpaugh, Chelsea Brooks, John Krahling, Nicole McClaskey, Hannah Mills, Terri Sharpless, Tom Stitcher and Jess Stoltz, went 44-5 and were runner-up to Tufts in the NCAA tournament to earn their second straight regional coaching staff honor. Until its 6-0, 14-inning loss to the Jumbos in the second game of the best-of-3 championship series, Salisbury had won 11 consecutive games, including nine straight in NCAA tournament play. The Sea Gulls finished the season ranked No. 2 in the NFCA Division III Top 25 Poll.

Under head coach Donnie Danklefsen and assistants Sarah Belote and Dennis Smith, the Thunder went 43-6 and hosted their NCAA Regional and defeated Emory in the Super Regionals to reach the NCAA Championship in Tyler, Texas. Trine finished the season ranked ninth nationally.

Under head coach Brenda Volk and assistants Beth Bonuso, Steve Evans and Erin Weber, Wisconsin-Whitewater compiled a 39-13 record. The Warhawks won four of five games at their NCAA Regional and two of three at Super Regionals to advance to the NCAA Championship, where their lone losses were to runner-up Salisbury and eventual champion Tufts. Wisconsin-Whitewater’s rally from a 6-1 deficit in its NCAA Championship opener helped fuel a fifth-place finish there. The Warhawks finished the season ranked fifth nationally.

Under head coach Margaret Yerdon-Grange and assistants Jen Colquhoun, Karen DiTucci and Nicole Osovski, Rochester went 32-14 and hosted both the NCAA Regional and Super Regional rounds. The Yellowjackets shut out Rowan twice in the Super Regionals to advance to the NCAA Championship site. Rochester finished the season ranked 13th nationally.

The Tigers, led by head coach Janae Shirley and assistants Bill Galloway — an NFCA Hall of Famer — and Guy Shirley, finished a school-record 45-10, winning 28 of their final 33 contests. East Texas Baptist made the site of the NCAA Championship its home away from home, playing 15 games at Suddenlink Field, including the American Southwest Conference and NCAA Regional tournaments, plus three regular-season games against conference rival Texas-Tyler. The only postseason games the Tigers didn’t play there they hosted just an hour’s drive away. East Texas Baptist finished the season ranked No. 4 nationally.