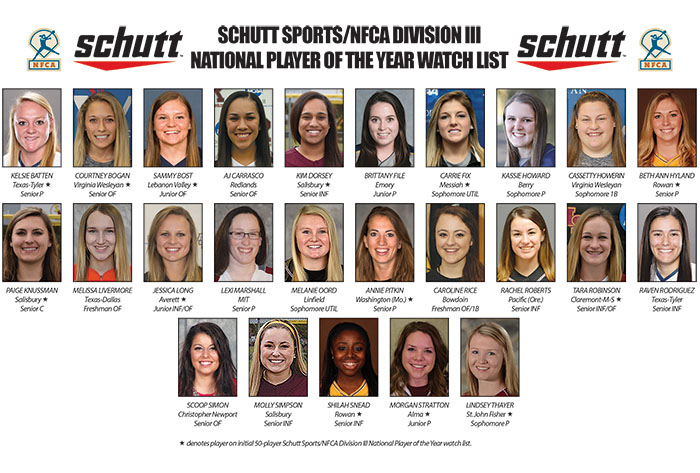 LOUISVILLE, Ky. — Twenty-five outstanding softball players have been chosen for the next step toward the inaugural NFCA/Schutt Sports Division III National Player of the Year award, which started at 50 and will continue to be paired down until just one player remains at the conclusion of the 2016 season.

No. 2-ranked Salisbury University leads the way on the new list, with three players — seniors Kim Dorsey, Paige Knussman and Molly Simpson — selected, while top-ranked Texas-Tyler, No. 3 Virginia Wesleyan and No. 14 Rowan all have two players in the running. Sixteen other teams have one player each.

Seniors Kelsie Batten and Raven Rodriguez represent Texas-Tyler, while fellow seniors Beth Ann Hyland and Shilah Snead play for Rowan. Yet another senior, Courtney Bogan, has been joined on the list by Virginia Wesleyan teammate, Cassetty Howerin, a sophomore.

Thirteen players from the initial list made the cut to 25, while the remaining 12 players are newcomers.

The next list in two weeks will narrow the field to 10, and, after that, three finalists will be chosen. The winner will be announced following the completion of the NCAA Division III Tournament in May.

Schutt Sports and the NFCA are also presenting a Division III National Freshman of the Year award for the first time this season.