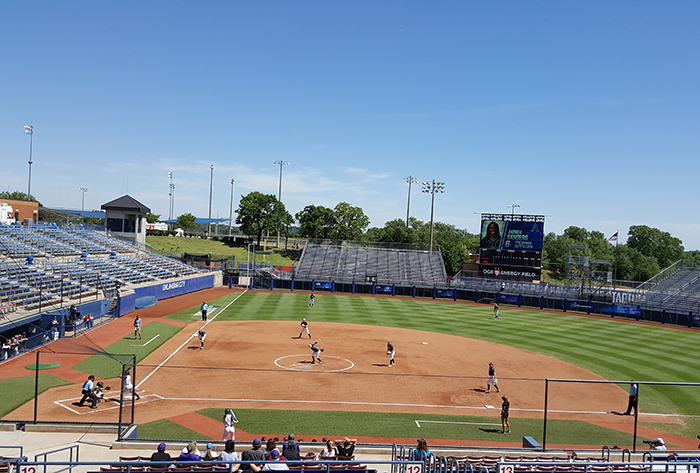 OKLAHOMA CITY —Texas-Tyler looked every bit the defending national titlist on Friday night at the NCAA Division III Championship, as it scored eight runs in the first inning en route to a 13-0 five-inning victory over Amherst, which had won all six of its NCAA tournament games to that point.

Kaylee Prather had three hits for the (46-4) Patriots in just the first two innings and fellow NFCA All-American Cheyenne Thompson also had three hits in the contest. Alaina Kissinger allowed just four hits and struck out four over five innings for her second win at the USA Softball Hall of Fame Complex and help give her team a day off while they await the winner of Saturday’s 2 p.m. ET Virginia Wesleyan-Illinois Wesleyan matchup.

In the other winner’s bracket game, the (43-6) Cardinals earned themselves a day off with a walkoff victory over Illinois Wesleyan.

Emma Savas singled to open the bottom of the seventh and advanced to second on Kristina Balsano’s groundout. She took third on Julia Sortisio’s fly out and scored the game-winner on an errant throw trying to cut her down going to third.

The (37-14) Titans tied the score 1-1 on Sydney Alery’s leadoff triple in the sixth and Shelby Fulk’s RBI double. Illinois Wesleyan managed six hits off All-American Lindsey Thayer (12 strikeouts), who had no-hit Williams just the night before.

The top-ranked (49-3) Marlins rebounded from their opening-day loss to Texas-Tyler with a three-hit shutout and 10 strikeouts from All-American and Schutt Sports/NFCA Division III National Freshman of the Year Hanna Hull.

In the fourth, Teresa Cardamone singled home Cassetty Howerin, who led off with a walk and moved to third on Blake Henderson’s double to left. Madison Glaubke’s single scored Henderson with the Marlins’ other run.

Kaylee Fox, Catherine Porter (double) and Erica Robles had one hit apiece in the season-ending loss for the (37-10) Thunder.

Pitcher Rebecca Duncan caught a line drive back through the middle to end a five-run rally by St. Catherine in the sixth, and the (37-12) Ephs held on for an one-run victory.

Ashley Sis doubled in two runs in the sixth for the (38-14) Wildcats, which was ousted with the defeat.