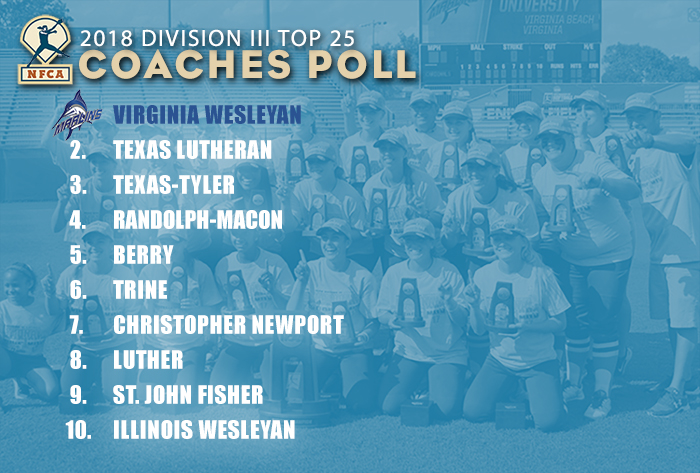 LOUISVILLE, Ky. — Defending national champion Virginia Wesleyan dodged an upset bid on Tuesday to improve to 22-0 and continue atop the NFCA Division III Top 25 rankings for a 13th straight week.

The Marlins edged unranked DePauw 2-1 and 12-9 on Tuesday to remain unbeaten over their last 28 games, going back to a 4-1 loss to then-reigning Division III titlist Texas-Tyler last May 25 at the NCAA Championship in Oklahoma City. Virginia Wesleyan has been the unanimous No. 1 team in the Top 25 since the eighth ranking of last season on April 5.

Texas Lutheran (23-1), which has won 16 straight since a 5-0 loss to the Marlins on March 4 at the NFCA Leadoff Classic in Tucson, Ariz., and Texas-Tyler (20-1), which has won 13 consecutive games, remain firmly in the second and third spots, respectively. Randolph-Macon (19-1) and Berry (23-3) both kept winning to each gain another place in the rankings and round out the first five.