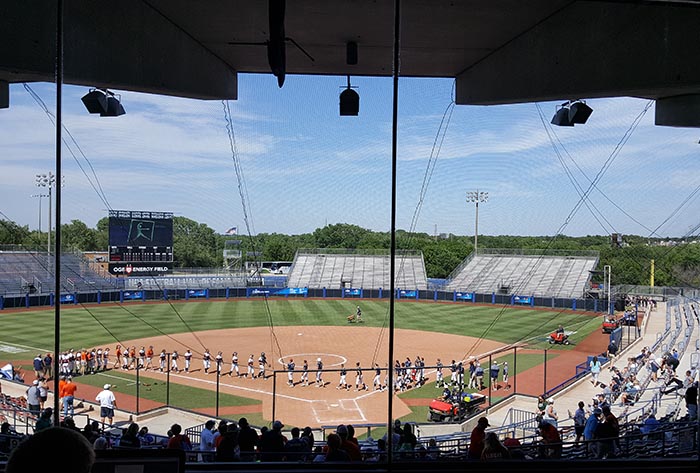 The (52-3) Marlins won 5-2 and then 5-3 and have won four straight in Oklahoma City since losing their opening game to Texas-Tyler, 4-1, on Thursday afternoon. St. John Fisher needed just one game Sunday to advance to final two, eliminating Williams, 4-3, in the game between the two Tyler-Virginia Wesleyan matchups, and are unbeaten in their three Oklahoma City games.

The first two games of the Championship Series are 2 and 4:30 p.m. ET on Monday, with the winner-take-all third game, if necessary, slated for noon ET Tuesday.

Courtney Wright limited the (46-6) Patriots to just five hits over the first five innings — after a complete-game two-hitter in the first game of the day — before yielding to NFCA All-American and Schutt Sports/NFCA Division III National Freshman of the Year Hanna Hull, who retired six straight batters to close the game.

Virginia Wesleyan jumped out to a 5-0 advantage in the bottom of the second. Beth Ford walked with the bases loaded to plate Teresa Cardamone with the first run and Kiersten Richardson reached on a fielding error to score two more. Madison Glaubke followed with a single to left to drive home the Marlins’ final two runs.

Texas-Tyler finally broke through against Wright in the fifth on Kaylee Prather’s two-RBI single and Cheyenne Thompson’s groundout. Alaina Kissinger entered in relief of Patriot starter Miranda Leal with two out in the second and retired 11 straight after an opening walk before Jessica Lindsay’s single in the sixth — finishing with four strikeouts over a brilliant 4.1 innings.

In the first game, Wright gave Hull a much-needed break after she had pitched all 21 of her teams’ innings over the first three days, throwing 67 of her 106 pitches for strikes, and Teresa Cardamone hit a three-run homer in the first inning to keep the Marlins alive.

Hannah Moore and Whitney Romero had the two hits in the first game for Texas-Tyler, who over the last three seasons has finished tied for third (2017), first (2016) and second (2015) in the NCAA Tournament.

NFCA All-American Lindsey Thayer struck out 10 over seven innings and the (44-6) Cardinals needed to fend off hard-charging Williams in the top of the seventh to advance.

Ashley Prince doubled home a run and Sarah Kubik added a two-run single to stake St. John Fisher to a 3-0 edge in the bottom of the third. Kubik homered in the fifth to add an insurance run that became the winning run with Williams’ late rally.

The (38-13) Ephs scored all three of their runs over the final two innings. In the seventh, Jessica Kim drove in two with an one-out single up the middle before a foul out and a fly out left two runners stranded to end the game. Rebecca Duncan had got Williams on the scoreboard in the sixth with an RBI double.