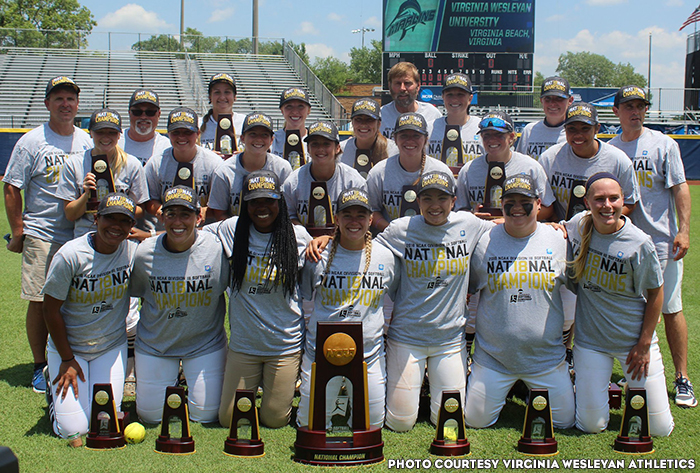 Glaubke had two hits, and two-time NFCA All-American Hull pitched an one-hitter, to fuel the Marlins’ 3-1 victory over Illinois Wesleyan in the decisive third game of the best-of-three championship series.

Hull, who also won Most Outstanding Player honors last season, finished the finals in Oklahoma City with 60 strikeouts over just 41 innings and six starts. She threw 418 of her 643 pitches at the tournament for strikes, and recorded a no-hitter, two one-hitters and a three-hitter. Hull allowed just four hits over her first three starts and 21 innings for the (55-3) Marlins at the eight-team event.

The win broke Virginia Wesleyan’s own NCAA Division III record for wins in a season, after the Marlins posted 54 victories during last year’s title run.

Glaubke’s blast to left in the bottom of the first scored Kiersten Richardson, who had led off the inning with a walk. Three-time All-American and fellow All-Tournament Team selection Cassetty Howerin added an insurance run in the fifth on a sacrifice fly that scored Richardson, who had walked, took second on a wild pitch and moved to third on Glaubke’s single to center.

But it was Illinois Wesleyan (39-13-1) who jumped in front first, getting on the scoreboard in the top of the first without the benefit of a hit. All-Tournament Team selection Jillian Runyon was hit by a pitch, stole second, and took third on Sydney Alery’s groundout. She scored on a wild pitch following All-American and fellow All-Tournament Team choice Sam Berghoff’s walk.

The Titans’ Bree Walker earned All-Tournament Team honors after scattering six hits over the first five innings of Tuesday’s finale, which followed up a stellar Monday, in which she pitched all eight innings of game two for Illinois Wesleyan and came on in relief of All-American Ally Wiegand in the first contest.

After dropping the opening game of the best-of-three championship series, 6-1, on Monday, the Titans forced a winner-take-all third contest by winning game two, 5-4 in eight innings, later in the day.