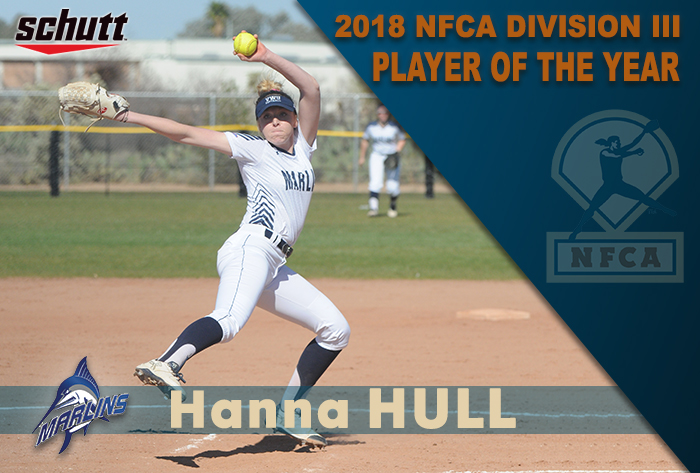 LOUISVILLE, Ky. — The NFCA is pleased to announce that Virginia Wesleyan University sophomore pitcher Hanna Hull has been chosen as the first repeat winner of the Schutt Sports/NFCA Division III National Player of the Year award.

The Chesterfield, Va., native was also voted NCAA Championship Most Outstanding Player for the second straight season, after finishing the finals in Oklahoma City with 60 strikeouts over just 41 innings and six starts. She threw 418 of her 643 pitches at the tournament for strikes, and recorded a no-hitter, two one-hitters and a three-hitter. Hull allowed just four hits over her first three starts (21 innings) for the Marlins at the eight-team event.

She opened play in Oklahoma City in style, with a 12-strikeout no-hitter against Ithaca last Thursday, then finished in similar fashion on Tuesday, with a one-hitter in Virginia Wesleyan’s 3-1 victory over Illinois Wesleyan in the decisive third game of the best-of-three championship series. That win broke the Marlins’ own NCAA Division III record for wins in a season, after they posted 54 victories during last year’s title run.

At 40-2, Hull matched Muskingum’s Jennifer Segner for the most victories in a season in NCAA Division III history — but had one less loss than Segner did in 2000 — and ranked first in the nation in strikeouts (376), second in shutouts (12) and third in hits allowed per seven innings (3.37) this year.

“I’m more proud of what she has accomplished this year than last,” Virginia Wesleyan head coach Brandon Elliott said of Hull. “She pitched under immense pressure, with ridiculous expectations, and against the toughest schedule in the nation all year, and still shined.”

“But the most impressive thing about Hanna Hull is her humility. If she could, she’d give this award to a teammate.”

She was again a three-time Louisville Slugger/NFCA Division III National Pitcher of the Week this year, and earned five weekly ODAC honors, in addition to being both the ODAC Pitcher of the Year and ODAC Tournament Most Outstanding Player for the second season in a row.

Hull was named the Most Outstanding Pitcher at the Marlins’ NCAA Super Regional and was selected to the All-Tournament team at their NCAA Regional.

University of Texas at Tyler pitcher Kelsie Batten was the inaugural winner of the Schutt Sports/NFCA Division III National Player of the Year award in 2016, after earning her fourth-straight NFCA All-America honor and recording 118 career wins, just four short of the all-time Division III record of 124 posted by Coast Guard’s Hayley Feindel from 2009-12.