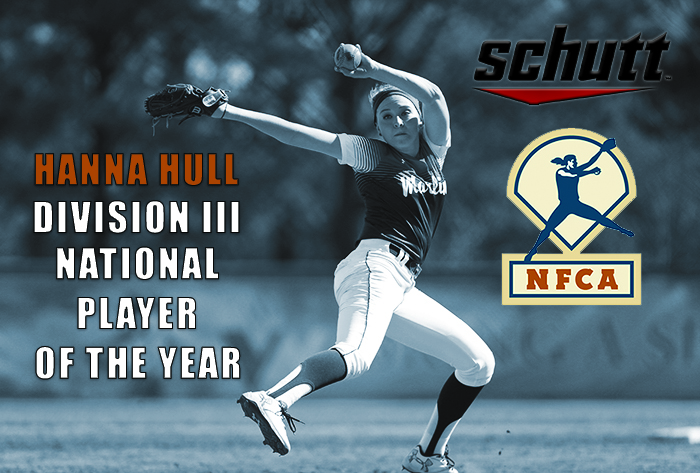 In six NCAA Championship contests, Hull went 3-1 with two saves, a 0.90 earned-run average and 46 strikeouts in 31 innings. She pitched two three-hitters and had an one-hitter with 13 strikeouts against St. John Fisher on Monday in game one of the best-of-three NCAA Championship Series.

For the season, she was 32-3 with a 0.51 ERA, just 90 hits allowed and 372 strikeouts in 220.1 innings. Hull set school marks for season ERA and strikeouts, and had a program-best 19 strikeouts in a two-hitter against Bridgewater on April 22. In 41 appearances (32 starts), she tallied nine three-hitters, nine two-hitters, five one-hitters and no-hit William Peace on March 7.

“I’m unbelievably proud of this young woman,” Virginia Wesleyan head coach Brandon Elliott said. “Not because of all the accolades, but because of the humility and grace she possesses.”

“She’s a tireless worker, unselfish, a perfectionist, a competitor and the ultimate teammate. We knew she had God-given ability and talent, but she became successful at the highest level of our game because of her trust in the process and the extraordinary efforts and knowledge from Jim Inzana, our pitching coach. Her maturity is also a direct reflection of Kasey Newcomb, our senior in the bullpen and the drive of Alana Peters and Courtney Wright alongside her. We talk about outloving each other and there is no better example than that in our bullpen under Coach Inzana’s leadership.”

“Her strength lies within her humility and genuine love for pitching,” Inzana added. “She is a consummate professional in every aspect and a joy to work with.”

Hull received first team NFCA All-America and Schutt Sports/NFCA Division III National Freshman of the Year honors at last Wednesday’s NCAA Championship Banquet. Her 6-0 victory over Illinois Wesleyan last Saturday at the NCAA Championship set a record for most wins by an Old Dominion Athletic Conference (ODAC) pitcher in a season and made the Marlins the first ODAC school with a 50-win campaign.

In addition to her NCAA Championship honor, Hull was selected as the Most Outstanding Player of the ODAC Tournament, the NCAA Regional and NCAA Super Regional. She previously was honored as the ODAC Pitcher and Rookie of the Year, and was a three-time recipient of the Louisville Slugger/NFCA Division III National Pitcher of the Week award this season (March 1, March 8 and April 12).

Howerin, Long and Thayer were all in the initial watch list group of 50 at the start of the season and remained on the list through cuts to 25 and 10 finalists, respectively. The list was a collaborative effort between the NFCA’s All-America Committee and Division III head coaches.