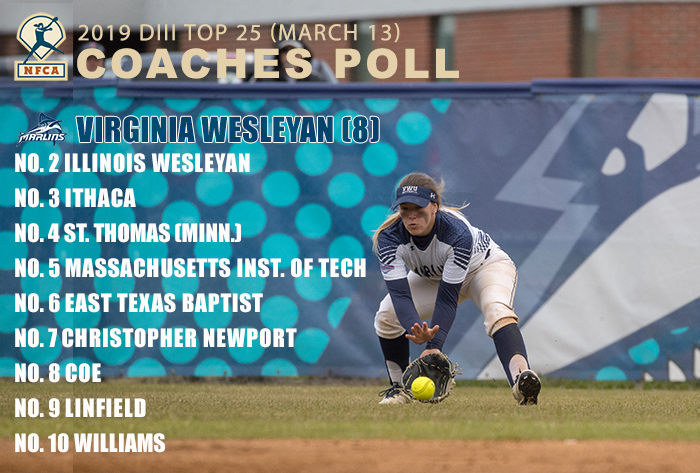 The (11-0) Marlins were 4-0 last week, then swept Averett on Tuesday to run their record over their last 75 games to 72-3. They also unveiled their completely renovated home, which was renamed Tom and Betty Broyles Field at TowneBank Park.

National runner-up Illinois Wesleyan (2-0) didn’t play last week, but opened its 2019 campaign with a pair of victories on Tuesday in Florida, and No. 3 Ithaca is off to a 3-1 start to its season.

The top six teams in the Top 25 remain unchanged, and the first 11 spots this week were unanimous. East Texas Baptist (19-0) scored five more wins to remain sixth, while No. 7 Christopher Newport (9-1) gained one spot in the rankings on the strength of a 6-0 week, and Coe (13-0) wrapped up a perfect trip to South Carolina to slide up to eighth.

Elsewhere, Claremont-Mudd-Scripps (9-2) moved up three places to 12th after sweeping La Verne for its eighth straight win, and Lynchburg (13-1) went all the way from receiving votes to 13th by winning all seven of its games last week, then scored a sweep of nationally-ranked Salisbury on Monday.

Kean (10-1) and Rensselaer Polytechnic Institute (9-2) are new to the Top 25 this week, at 18th and 23rd, respectively, in recognition of their strong starts, while No. 25 Pacific (12-5) moved up from the receiving votes category.