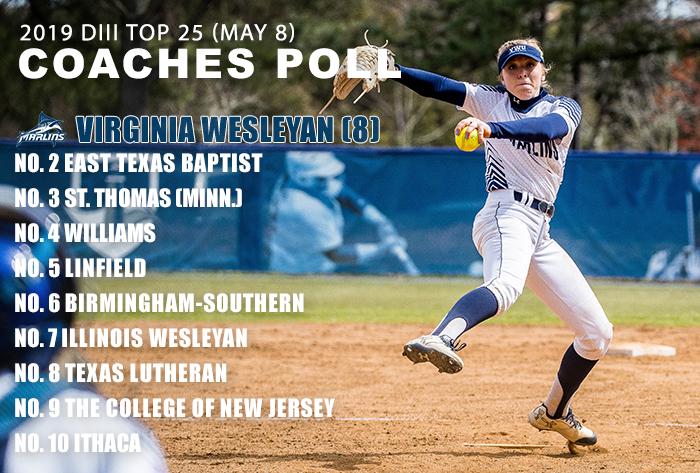 The (40-4) Marlins stay in the top spot for a fifth week, after winning their fourth-straight Old Dominion Athletic Conference title. They have been idle since beating Randolph-Macon on April 29 to claim their 12th conference championship overall.

Meanwhile, East Texas Baptist (39-4) returns to the No. 2 spot, after rallying to beat Mary Hardin-Baylor, 2-1, on Saturday for its ninth American Southwest Conference tournament title, and St. Thomas (38-5) also gained one spot after outlasting Hamline, 1-0 in 11 innings, in the Minnesota Intercollegiate Athletic Conference tournament championship. Both leapfrogged Williams (33-5), which slipped to fourth, following the Ephs’ 3-2 loss to Tufts in the New England Small College Athletic Conference final, that snapped a 22-game win streak.

Poll regulars Ithaca (26-7-1) and Central (26-8) each moved up several spots after claiming their respective conference championships, and will both be making a Division III-record 30th NCAA tournament appearance later this week.

Emory (30-10) jumped back into the rankings at the No. 18 spot after winning their last four during a season in which they’ve beaten 17 ranked teams. And despite Saturday’s loss, Mary Hardin-Baylor (28-6) has won 11 of its last 13, and joins the poll at 22nd this week.