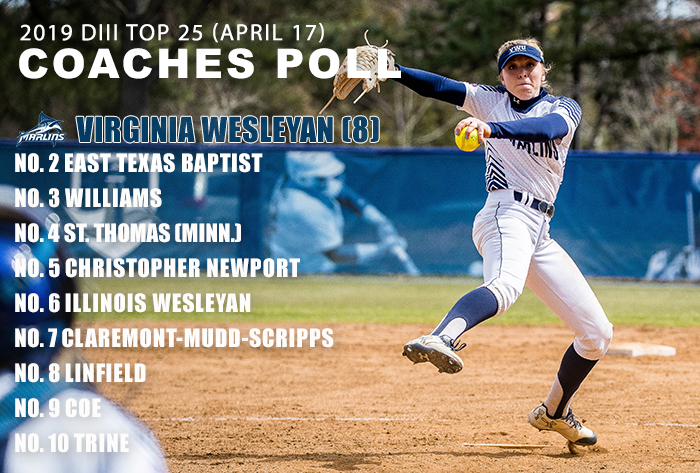 The (31-2) Marlins have now won 12 straight, and are back on track after dropping to No. 2 for two weeks before reclaiming the top spot on April 10. Before that, Virginia Wesleyan had held the No. 1 position for 25 straight weeks — a span of 720 days, which included two NCAA Division III titles.

East Texas Baptist (32-2) remained No. 2 for a second consecutive week despite dropping the third game of its American Southwest Conference series at Hardin-Simmons on a two-run walkoff homer. That loss snapped a 12-game win streak and was just the Tigers’ second defeat in 34 games.

Williams (23-4) has now won 12 straight, and gained four more places to take over the third spot this week, while St. Thomas (28-4), which is riding a 13-game win streak, moved all the way from 11th to fourth. Last week’s third through sixth teams — who all lost a game — fall in line after that to round out the top eight.