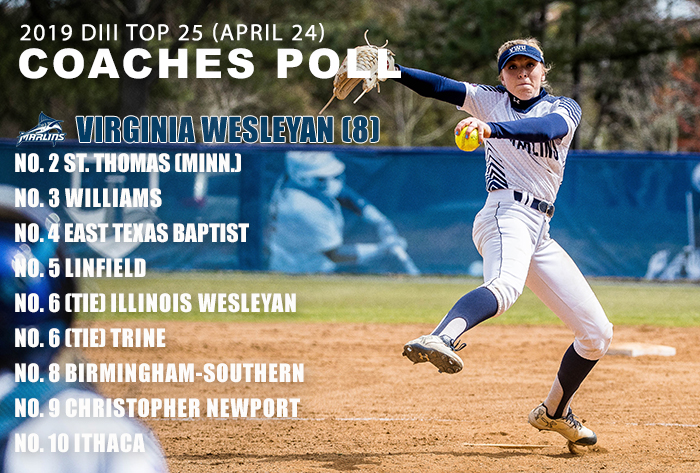 LOUISVILLE, Ky. — It’s becoming tougher to separate the top teams in the NFCA Division III Top 25, but there’s no change at the top, with two-time defending national champion Virginia Wesleyan University at No. 1 for a third-straight week and the 28th time in the last 29 weeks.

The (34-3) Marlins have now won 15 of their last 16. They went 3-1 last week, including a run-rule sweep of Shenandoah and a split with Ferrum. Two-time reigning Schutt Sports/NFCA Division III National Player of the Year Hanna Hull fanned 15 Ferrum batters while tossing a no-hitter in Virginia Wesleyan’s 5-0 victory on Saturday.

St. Thomas (33-5) and Williams (26-4) both went unbeaten last week to rank ahead of East Texas Baptist (33-4), which slipped two spots to fourth after dropping two of three to longtime American Southwest Conference rival Texas-Tyler, who is moving to Division II next season.

Meanwhile, a patented late-season surge helped DePauw (22-10) break into the rankings this week at No. 25. The Tigers improved their record to 14-2 in April with their fifth straight victory in Monday’s sweep at Wittenberg.