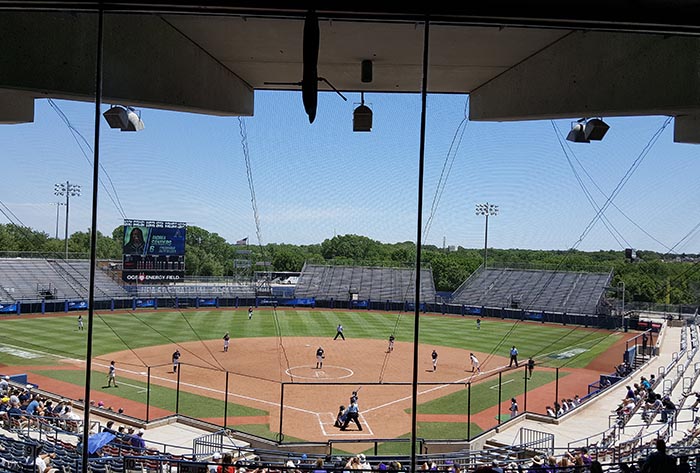 The (50-3) Marlins have won two straight in Oklahoma City since losing their opening game to Texas-Tyler on Thursday afternoon. They now need to defeat the (46-4) Patriots twice to reach the best-of-three NCAA Championship Finals starting on Monday.

Virginia Wesleyan scored all six of its runs over the first two innings and NFCA All-American and Schutt Sports/NFCA Division III National Freshman of the Year Hanna Hull (eight strikeouts) took it from there, pitching her second-straight three-hit shutout.

Fellow All-American Cassetty Howerin got the Marlins on the scoreboard with her single in the top of the first and Blake Henderson’s foul out scored another run. Jessica Lindsay drove in the other two in the inning with a single to left.

Sam Berghoff, Julie Josten and Maggie Graham (double) had the three hits for the (37-18) Titans, which had battled to the end all season and made a name for themselves with numerous late-inning comeback victories.

Like Virginia Wesleyan, the (38-12) Ephs earned another shot at the team that defeated them on the first day in Oklahoma City, defeating their New England Small College Athletic Conference rival Amherst in Saturday’s second elimination game.

Williams now must defeat St. John Fisher and their All-American pitcher, Lindsey Thayer, who no-hit them on Thursday, twice to reach the final two.

In the fifth, Brenna Martinez drove in Williams’ first run on an one-out single to left, while Riley Salvo’s sacrifice fly plated its second run and Margo Beck scored on a wild pitch.

The Ephs added another run in the sixth on Rebecca Duncan’s double to right center, scoring Jessica Kim, who had opened the inning with a single.

Amherst took a 1-0 lead in the third on an unearned run. After Lauren Tuisk opened the frame by reaching on a throwing error, Sammy Salust and Kyra Naftel reached on bunt singles, before Kate Kopatic grounded into a double play and Alena Marovi walked. Julia Turner then walked to force home Salust.

The first two games of the best-of-three NCAA Championship Finals are slated for Monday at 2 and 4:30 p.m. ET. If necessary, the winner-take-all third game would be played Tuesday at noon.