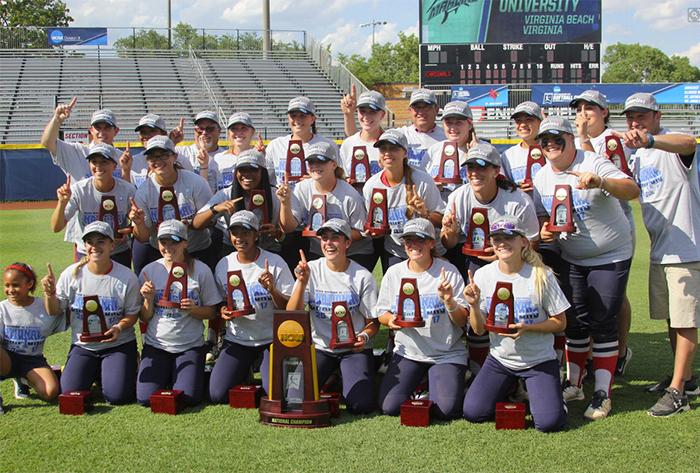 The (54-3) Marlins swept the best-of-three Championship Series with 5-0 and 1-0 victories, one day after setting the Division III record for wins in a season with the second of two straight triumphs over defending national champion Texas-Tyler.

Tournament Most Outstanding Player Hanna Hull, an NFCA All-American and the Schutt Sports/NFCA Division III National Freshman of the Year, tossed an one-hitter with 13 strikeouts and no walks in game one, then came on in relief of starter Courtney Wright (five innings, three hits, no runs) to retire six of the final seven batters — four on strikeouts — to close out the decisive second game.

All-Tournament selection and NFCA All-American Cassetty Howerin drove in four of Virginia Wesleyan’s six runs in the two Championship Series games, including an RBI double in game two that scored fellow All-Tournament choice Madison Glaubke, who had opened the inning with a walk. It was one of only two hits in the contest — Blake Henderson had the other — off Cardinals’ ace Thayer.

In game one, Hull threw 73 of her 113 pitches for strikes and did not allow a hit until NFCA All-American Katie Mazierski’s one-out single to left in the bottom of the fourth, which broke a stretch of five straight strikeouts.

Howerin doubled home a run in the third and hit a two-run homer in the seventh, while Henderson homered in the fifth and walked and scored the Marlins’ other run.

This was Virginia Wesleyan’s first trip to the NCAA Division III Championship, while No. 8 St. John Fisher (44-8) finished tied for third at last year’s event and had been unbeaten in the postseason (eight straight wins) since losing 2-0 to Ithaca in the Empire 8 Tournament on May 7.

The Marlins won six straight in Oklahoma City after dropping their opening game to Texas-Tyler, 4-1, on Thursday afternoon. St. John Fisher, meanwhile, needed just three games to reach the finals, going 3-0 over the first three days in Oklahoma City to earn a day off on Saturday.