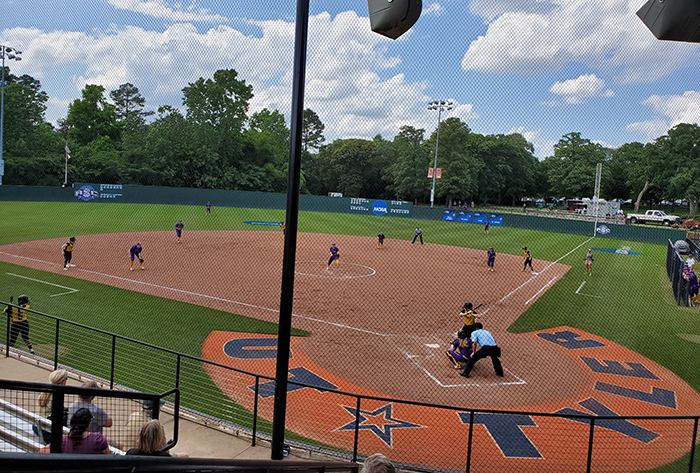 TYLER, Texas — Mercede Daugherty’s long one-out homer to left in the top of the fourth was one of just two hits off All-America pitcher Ally Wiegand on Thursday.

But it was all the offense Trine (36-6) needed in an 1-0 victory over second-seeded Illinois Wesleyan on the first day of the NCAA Division III softball championship at Suddenlink Field.

Once staked to a lead, Thunder starter Hannah Kampmann really got to work, retiring 12 of the final 14 batters she faced in a three-hit shutout.

Daugherty’s blast was the first hit off Wiegand, who had struck out six of her first 10 batters and entered the game as the Division III leader in ERA (0.40). For the game, Wiegand allowed just two hits and fanned 10. Claire Ryan had the only other hit for seventh-seeded Trine in the fifth.

Meanwhile, Brittany Murphy collected two of the three hits in the game for the (38-9) Titans, with leadoff batter Jillian Runyon scoring the other.

Trine advances to Friday’s 5:30 p.m. ET winner’s bracket game against No. 3 seed Emory, while the Titans will play 2:30 p.m. Friday against No. 6 seed Randolph-Macon, with both teams in that early matchup needing to win to stay alive in the double-elimination event.

In the other winner’s bracket game, Eastern Connecticut State faces Texas Lutheran in the 8 p.m. nightcap, while St. Thomas plays Williams at noon, with the loser becoming the first school to be eliminated.

Morgan Bolduk tossed a three-hitter to outduel fellow NFCA All-American Kierstin Anderson-Glass, as the No. 8-seeded Warriors opened with a victory over the top-seeded Tommies.

Alexis Tyrrell singled home two runs with two out in the third, as Eastern (35-11) overcame an early 1-0 deficit. Sabrina LeMere and Megan Hodgdon both singled and scored in the inning.

St. Thomas (43-6) got on the scoreboard first in the bottom of the first. Elise Barnes singled home Kristin McGonigal — who had walked and stole second. Anderson-Glass was her usual stingy self in the loss, fanning nine and walked none.

Madisyn Cates went 4-for-4 with two runs scored, while Kassie Maddox and winning pitcher Kayla Oliveira both had two RBI, as the fourth-seeded Bulldogs scored once in the second, and six runs over the final three innings, to cruise past the No. 5 Ephs.

Texas Lutheran (36-8) took the lead to stay in the bottom of the second. Cates led off with a double to left center, was bunted to third by Chassetty Raines, and scored on Maddox’s single up the middle.

Meanwhile, Kirstin Mapes had two hits, and had a hand in Williams’ lone run in the sixth.

Mackenzie Mu delivered a leadoff double and Mapes moved her to third with a single. After a walk and two outs were recorded, Mu scored on a passed ball for the (38-6) Ephs.

Sarah Katz was one of three players with three hits, and put her team ahead with a two-run single in the sixth, as the Eagles scored a come-from-behind victory.

Sami Feller and Jenna Wilson also had three hits for Emory (37-12), who outslugged the Yellow Jackets, 14-11, in a game that featured 12 runs and 25 combined hits. Cassie Baca drove in three runs, including two on a homer that answered Randolph-Macon’s four-run first.

The (30-16) Yellow Jackets had four hits and took advantage of two Emory errors in the opening frame to build a quick advantage. Roth and Stone singled to open things, and Brittany LaPrada and Taylor Sanderford later singled for Randolph-Macon.

Kerstin Roth, LaPrada and Sanderford had two hits apiece in the loss.