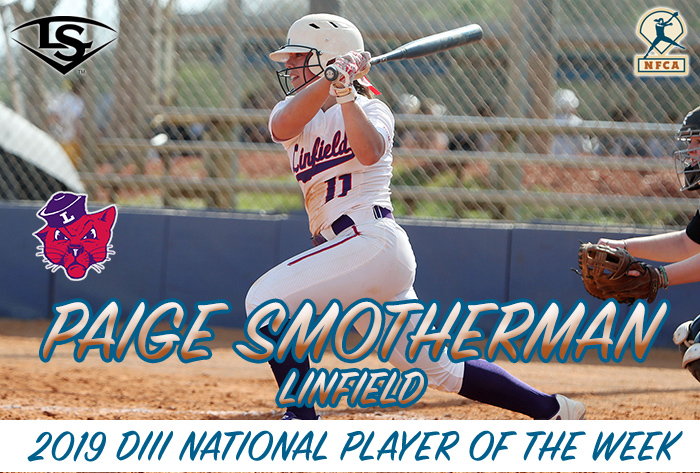 Junior right-hander Wiegand picked up two wins over Lake Forest, including a no-hitter and a successful relief outing, in a 3-0 overall week. In the first game, she fanned a season-high 16 and allowed just two Foresters to reach base on a pair of hit batters. In the nightcap, she entered with the game tied in top of the seventh with no outs and two on, and the score tied at 4-4, and proceeded to allow no runs and no walks while striking out three in a nine-inning victory. In her other game, a 4-1 win over Monmouth, she struck out 10 and allowed just four hits and no walks.

Senior second baseman Smotherman, meanwhile, hit .706 (12-of-17) with a double, two walks, five homers and 11 runs batted in over a six-game stretch. She tied a Linfield single-game record with three homers in consecutive at-bats against three different pitchers to help the Wildcats overcome a 4-0 deficit in a 10-9 win over DePauw. Smotherman had her fourth homer of the day in the second game of the doubleheader, and played flawless defense (nine putouts and four assists) for the week.

Saint Benedict freshman designated player Maureen Burns went 5-for-5 with a game-winning three-run homer and seven RBI against St. Catherine. … Lynchburg senior first baseman Mackenzie Chitwood hit .500 (10-for-20) with three doubles, a triple, two homers and nine RBI. … Farmingdale State senior pitcher Jaxie Collard went 2-0 with a 0.00 ERA, and had a five-hit shutout and four perfect innings of relief. … East Texas Baptist freshman pitcher Preslye Cox went 2-0 with a 0.00 ERA and had 19 strikeouts and eight hits allowed over 12 innings, including a five-inning relief win and a 5-0 shutout. … Calvin senior third baseman Maddie DeGroot became the school’s career leader in runs scored and at-bats, and hit .400 with five runs, a double, triple and six RBI. … Trinity (Conn.) senior shortstop Courtney Erickson batted .600 (6-for-10) and had three two-hit games, while becoming the school’s career leader in RBI with 104. … East Texas Baptist freshman shortstop Hannah Garcia reached base six times and scored five, while hitting .600 with a double, homer and three RBI. … New York University senior center fielder Diana King was 12-for-23 (.522) with four multi-hit games. … Coe senior shortstop Haley Jones batted .692 (9-for-13) with nine runs, two doubles, two homers, and seven RBI. … Salisbury freshman right fielder Jillian Jones hit her first collegiate homer in the first game and had a sacrifice bunt to help set up the winning run in the second game against Penn State-Harrisburg. For the week, she hit .615 with two doubles, two homers and eight RBI. … Lawrence sophomore catcher Ceara Larson went 8-for-9 with three doubles and three homers in a doubleheader sweep of Beloit. In the first game, she went 5-for-5 with two doubles, two homers (including a grand slam) and six RBI. … Moravian junior pitcher Paige Lesher helped the Greyhounds extend their win streak with a pair of wins and just one walk over 15 innings. …  Farmingdale State junior first baseman Jessica Lombardo hit .636 with six runs, a double, and eight RBI. … Calvin senior shortstop Kristen Newman extended her hit streak to five games, while batting .545 from the No. 9 spot in the lineup. … Salisbury senior pitcher Shannon Powell earned the win in all four of the Sea Gulls’ wins, allowing just one unearned run and two walks over 18 innings. … Eastern Nazarene junior pitcher Elisabeth Schaffer tossed a perfect game (eight strikeouts) against Bay Path and had an one-hitter (11 strikeouts) versus Lasell. …  Moravian junior right fielder Emily Stanilious was 8-for-14 (.571) with three runs, two walks and three RBI. … Central (Iowa) junior center fielder Sara Tallman batted .800 and reached base in all eight plate appearances last week, including four hits, three walks and a bunt that was ruled an error. She singled in the tying run in one game and scored the go-ahead run in another. … Rensselaer Polytechnic Institute freshman center fielder Jessica Torch burned the competition for the red-hot Engineers (14 straight wins) with a .714 average, six runs, and 10 steals in 10 attempts. … New York University senior pitcher Karissa Zubulake went 3-0 with an 1.40 ERA, 20 strikeouts and four earned runs over 20 innings in the circle. She fanned 11 over six innings in a win over Rutgers-Newark.