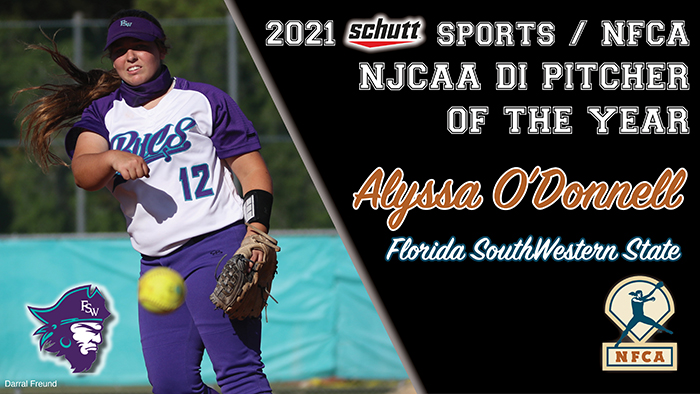 Seminole State’s Moreno played a pivotal role in the Trojans fifth-place finish at the NJCAA DI National Championship Tournament. The freshman third baseman was a unanimous first-team All-America selection, batting an eye-popping .673 with 101 base hits in 150 at bats and 102 RBI, all NJCAA DI season bests. She also led the NJCAA with a .709 on-base percentage, 192 total bases and a 1.280 slugging percentage. Moreno homered 21 times, recorded a hit in 42 of 46 contests, 34 multiple-hit contests and had streaks of 14 and 11-game multiple-hit games.

FSW’s O’Donnell led the Bucs to their first-ever NJCAA DI national title. The freshman hurler went 23-1 with a 1.67 ERA and 118 strikeouts over 138.2 innings pitched. O’Donnell, a unanimous first-team All-American, recorded one save and held her opposition to a .194 batting average.

Willems, who also garnered the Diamond Sports Catcher of the Year accolade, hit .450 with a team-best 17 doubles and 26 walks. One of three Howard first teamers, she drove in 76 runs, scored 66 runs, slugged 1.076 and reached base at a .566 clip.

Taking home first-team pitching honors with O’Donnell were Grayson’s Dylann Kaderka and Jefferson College’s Kristina Bettis. Kaderka, who helped the Vikings to a national runner-up showing, finished with a NJCAA DI-best 31 victories. She posted a 2.28 ERA, with 212 strikeouts in 202.2 innings of work. She fanned 7.32 batters per seven innings and finished 27 of the 29 games she started. Bettis was the division’s top strikeout pitcher with 302, averaging 12.66 per seven innings. She recorded the lowest ERA amongst NJCAA DI starting pitchers at 1.17 and finished the 2021 campaign 20-6 and registered five no-hitters.

Southwestern Community College’s (Iowa) Kaitlyn Schad was the first-team selection at first base. The ICCAC Offensive Player of the Year hit .488 and of her 83 hits, 12 of them were home runs. Schad drove in 83, good for eighth in NJCAA DI and scored 48 times as well.

Seminole State shortstop Taylor Rowley comes in as the first-team shortstop. One of the top sluggers in NJCAA DI, Rowley hit .533 with 14 doubles, 27 home runs and a 1.130 slugging percentage. She ranks third in slugging, tied for third in homers, tied for seventh in hits (90) and ninth in batting average.

The third first-team outfielder is Grayson’s Jordyn Smith. Another pivotal player in Grayson’s national runner-up finish, Smith tied for third with 89 runs scored. She hit .473 on the year with 10 doubles, a triple, 14 long balls and 64 RBI.

The first team utility/pitcher is Rosaury Perez from Trinity Valley Community College. A dual threat for the Cardinals, Perez hit .463 with 68 hits, 17 doubles, 13 home runs, 57 RBI and 36 runs scored. As a relief pitcher, she posted a 3.96 ERA with 192 strikeouts in 134.2 innings pitched. She averaged just under 10 strikeouts per seven innings at 9.98.

Redman and Young keyed Butler to a NJCAA DI national championship berth and fifth-place overall finish. Redman posted a remarkable 26-1 record with a 1.22 ERA and 156 strikeouts in 120.1 innings of work. She fanned 9.07 batters per seven innings and issued just 13 walks for a remarkable strikeout to walk ratio of 12. Golden Shoe winner Young won the NJCAA DI’s stolen base title with 58 steals in 60 attempts. Additionally, she was one of Butler top offensive threats, recording division-bests with 111 runs, a two-run per game average, and 34 doubles. She also was second nationally with 102 hits and third overall with a .554 batting average.

Plummer was the NJCAA DI National Championship Most Valuable Player, while Laudino earned her second first-team nod. Plummer, an outfielder, had the division’s fourth-best batting average at .543 and was sixth nationally in on-base percentage at .592. She also scored 50 runs, recorded 62 hits and had 16 stolen bases. Laudino earned the at-large selection at second base. A strong fielder, Laudino committed just four errors in 129 chances for a .969 fielding percentage. She hit .485 with 79 hits, six doubles, 24 RBI and 66 runs scored. She swiped 33 bases in 36 attempts and posted a .517 on-base percentage.

Southern Nevada third baseman Covington topped NJCAA DI with 106 base hits and finished the season batting .502 (106-for-211) with 23 doubles, five triples, 11 home runs, 82 runs scored and 60 RBI. Her runs scored and doubles ranked her sixth and tied for sixth.