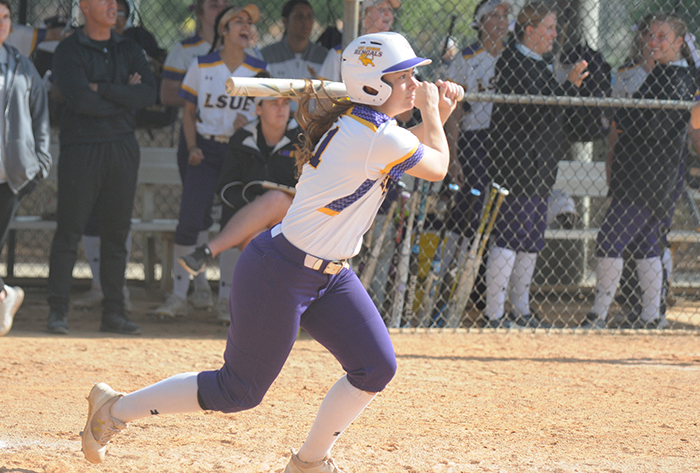 Columbus, Ga. – Florida SouthWestern State College and LSU Eunice will face off for the Gold Bracket title on Sunday morning at the South Commons Softball Complex. Additionally, Central Alabama Community College and Northwest Florida State College will do battle for the Silver Bracket championship. First pitch for both games scheduled for 9:00 a.m.

In the gold semifinals, No. 2 (DII) LSU Eunice executed a first and third double steal with two outs in the top of the seventh to edge No. #14 (DI) Gulf Coast State, 4-3. The Bengals grabbed a 3-0 lead, but it was quickly erased by a three-run bottom of fourth by the Commodores.

No. 1 (DI) Florida SouthWestern jumped out to a quick 4-0 lead in the top of the first. After No. 1 (DII) Jones County made it a 5-2 ball game, the Buccaneers pushed their lead to 9-2 with a four-run fourth and capped it off with two more runs in the fifth. Paris Woods and Pallas Potter recorded three hits apiece, while Woods and Rebeca Laudino scored three times for Florida SouthWestern.

In the first round of gold bracket play, Hallie Donald tossed a four-hit shutout in a 7-0 Jones County win over Seminole State. Gulf Coast’s Kristina Warford roped a three-run triple with her squad trailing 2-0 in the sixth to propel the Commodores to a 4-2 win. Florida SouthWestern entered the fourth trailing 5-1 but scored four in the bottom half of the fourth, two in the fifth and three in the sixth and held on for the 10-7 triumph. LSU Eunice advances courtesy of a four-run fifth to open a big lead and defeat Indian River, 7-4.

In the silver semifinals, Central Alabama held off a furious late-inning rally by Rock Valley and defeated the Golden Eagles, 11-9. The Trojans raced out to an 11-2 lead after three and a half innings, but RVC nearly came back, scoring a run in the fourth, two in the fifth and four more in the bottom of the seventh. In the seventh, the Golden Eagles pushed across the four runs and had the bases full with two outs but Amber Parker came in a was able to strike out the final batter for the save.

In the other matchup, Northwest Florida defeated Wabash Valley, 6-2. The Raiders scored single runs in the first and second innings and pushed their lead to 5-0 with a three-run fourth, which included an RBI triple by Ashley Autuori and an RBI double by Maggie Wheless.

No. 9 (DI) Wallace State-Hanceville played a predetermined schedule and finished the tournament with a 5-0 mark. The Lions capped off the tournament with wins over Rock Valley College (7-5), Lansing Community College (5-1) and Illinois Central College (3-0). Mabry Norris tossed her second shutout of the tournament against the Cougars, fanning four and scattering seven hits. Against the Golden Eagles, the Lions (25-3) rallied from a 5-2 deficit with three runs in the fifth and won in the sixth when Callie Ryan belted a two-out, two-run go-ahead home run.

In other action, Indian River’s Dawn Bolding recorded her second 14-strikeout outing of the tournament in a one-hit shutout of Des Moines Area. Seminole State scored 10 unanswered runs after falling behind 4-0 in the first to knock off Navarro, 10-4. Kirkwood’s Brandee Bouman and Erin Hocker combined on a shutout of Sinclair.