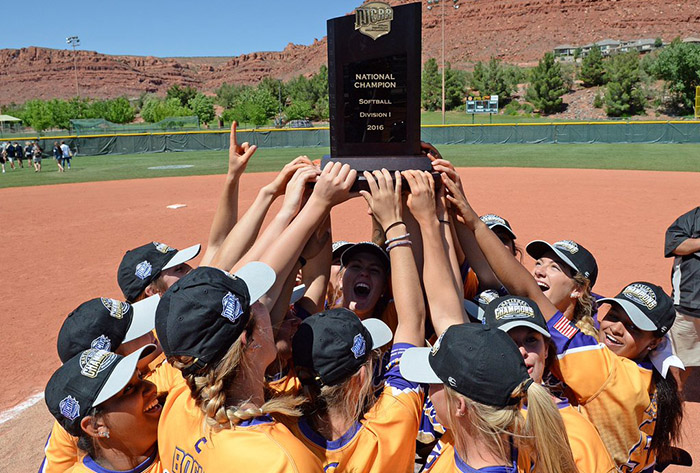 ST. GEORGE, Utah – Butler Community College claimed the 2016 NJCAA DI National Championship with a 4-2 come-from-behind victory over defending national champ Chipola (Fla.) in the title game on May 21 at the Canyons Complex.

Chipola jumped out to a 2-0 lead after three innings. Madison Ragan launched a solo home run to right with two outs in the top of the first and added another run in the third inning on a triple and a Butler error to take a 2-0 lead.

In the fourth, the Grizzlies (53-4) pushed across their first run of the game as Megan Wurts led off the inning with an infield single and would later score on a Becca Schulte single.

An inning later, Butler loaded the bases with two outs. Wurts stepped to the plate and dropped the game-winning single into centerfield, driving in two runs, with Amelia Cutchlow also scoring when the throw to the plate got away from the catcher to give Butler a 4-2 advantage.

Butler finished the year winners of its final 38 games, the longest streak in program history.

Pitcher Jennifer Hittinger was named the tournament's MVP, going 3-0 in the circle, including the win in the title game. Becca Schulte, Brynn Minor and Morgan Heckart were named to the all-tournament team and Doug Chance was honored as the top coach in the tournament.