Day one of NFCA NJCAA Leadoff Classic in the books 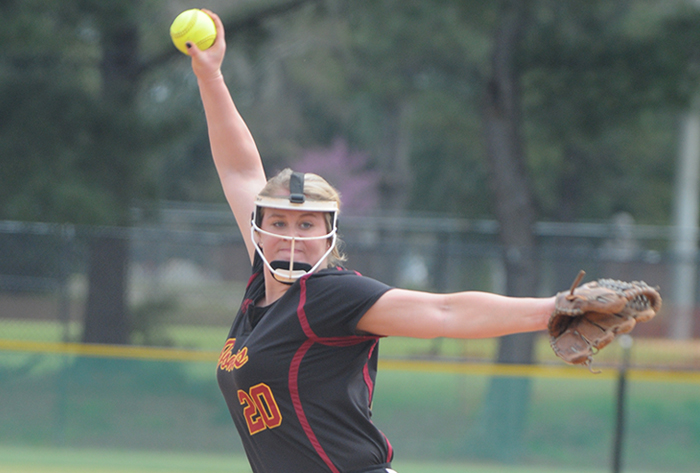 Due to inclement weather arriving on Sunday morning, the schedule was reworked with some teams playing all three of their pool games on Friday. Pool play will conclude tomorrow morning with four games at 9:00 a.m. Following those contests, seedings for bracket play will be determined and first pitches of the Gold Bracket games will be at noon and the Silver Bracket at 2:30 p.m.

In addition to the five undefeated squads, Navarro College was the only program to finish with a 2-1 mark.

NJCAA DII No. 1 Jones County won its three contests by a total margin of five runs. The Bobcats gave DII’s No. 4 squad Kirkwood its first loss of the season, 6-4 by scoring two runs in the top of the seventh on an RBI single by Faith Denton and a run-scoring double by Kayla Collins.  They also edged Indian River, 5-3 and Northwest Florida State College, 3-2.

DMACC, ranked No. 6 in DII, blanked Central Alabama, 1-0 as Josie Swafford fanned 11 in a three-hit shutout. The Bears also raced out to a 6-0 lead after four innings and held on for a 7-4 triumph over Gulf Coast State (14th– DI).

LSU Eunice received a two-out, two-run single from Madison Monson in the bottom of the fifth and edged Northwest Florida, 3-2. The Bengals then defeated Lansing, 7-2.

Seminole State squeaked by Sinclair 4-3 and knocked off Illinois Central, 4-1.

In other action, Navarro scored 10 unanswered runs, highlighted by Sarah Koeppen’s grand slam, in the bottom of the sixth to run-rule Tallahassee, 10-2. Koeppen also drove in three runs in a 6-3 triumph over Wabash Valley.