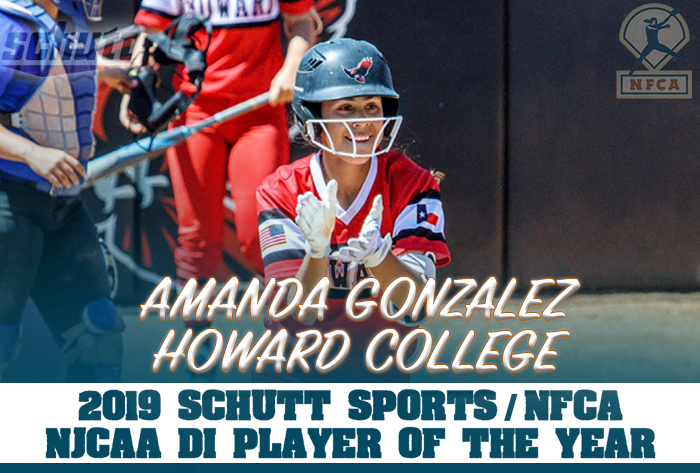 LOUISVILLE, Ky. — The NFCA is pleased to announce that Howard College freshman infielder Amanda Gonzalez has been chosen as the 2019 Schutt Sports/NFCA NJCAA Division I National Player of the Year.

Gonzalez made a huge impact for the Hawks, earning first-team NFCA All-America honors in her first collegiate season, by batting .505 and leading NJCAA Division I in home runs (29), runs batted in (102), runs scored (97) and total bases (228). She ranked second nationally in slugging percentage (1.129), third in hits (102) and fourth in both doubles (27) and times hit by pitch (24).

The Santa Monica, Calif., native also stole 33 bases in 36 attempts, drew 14 walks, and struck out just 12 times in 244 plate appearances for Howard, which went 47-13 and advanced to the NJCAA Division I championship in May at the Canyons Complex in St. George, Utah.

She had two three-homer games — both on the road — Feb. 13 at Cisco and April 20 at Frank Phillips, and homered twice on April 26 at home against Luna.

The Schutt Sports/NFCA NJCAA Division I National Player of the Year recipient is selected by the NFCA’s NJCAA Division I All-American Committee, which chooses one of its 16 first-team All-Americans for this honor. This was the first year that the award was split to honor players in each of the Association’s five two-year college divisions.