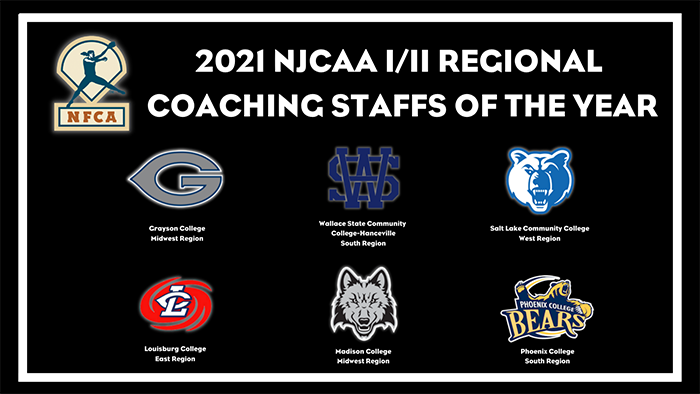 Under the direction of head coach Michael McBrayer, along with assistant coaches Ashley Mills and Jason Miller, the Vikings (44-5) captured the Region 5 North softball tournament and advanced to the NJCAA DI Softball World Series. McBrayer was tabbed NTJCAC Coach of the Year after leading fourth-ranked Grayson to a 26-5 league mark and a NTJCAC softball championship.

Head coach A.J. Daugherty, the 2021 Alabama Community College Conference (ACCC) Coach of the Year, and assistant coach Cadi Oliver guided the Lions to a 53-4 overall record and 26-2 in league play. Currently ranked fifth in the NJCAA DI Top 20 rankings, Wallace State cruised to its 13th ACCC tournament title by outscoring the opposition 44-4 over four contests. The Lions will enter the NJCAA DI Softball World Series on a six-game win streak and have won 27 of their last 28 games.

Salt Lake CC, guided by head coach Cyndee Bennett, is currently the No. 1 team in NJCAA Division I. Along with tutelage from assistant coaches Tara Bendt, Bob Shober, Megan Reed, Lindsay DeLeon and Sara Bendt, the Bruins have posted a 51-2 mark and will be heading to the postseason after sweeping through the Region 18 Tournament. SLCC cleaned up in Region 18 honors, earning all three individual accolades, including Bennett’s Coach-of-the-Year recognition.

Head coach Eric Lee steered Louisburg to a Region X championship and trip to the NJCAA DII Softball World Series in Oxford, Ala. The Hurricanes swept through Pasco-Hernando State College twice and Patrick Henry Community College to improve to 39-6 and capture their third straight region title. Posting a 19-0 mark in Region X, Louisburg was rewarded with the region’s player of the year honor in Bri Tucker.

Soon-to-be inducted NFCA Hall of Fame coach Heinz Mueller is at the helm of top-ranked Phoenix College. Mueller, along with assistants Alyssa Fernandez, Mike Grimaldi and Elvis Richardson, have steered the Bears to a 39-1 mark and kept them in NJCAA DII’s top spot all season. After dropping its third game of 2021, Phoenix College has reeled off 37 straight victories, completing an undefeated run through Arizona Community College Athletic Conference and Region I play.

The NFCA NJCAA Division I & II National Coaching Staffs of the Year will be announced on June 7.