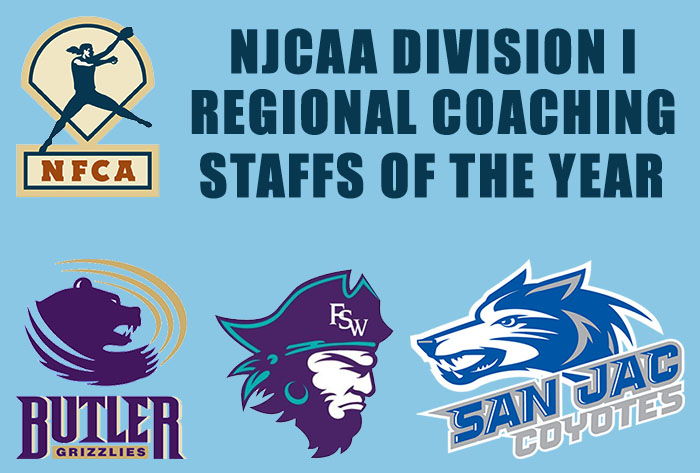 In the West, the Grizzlies went 58-1 and won their second-straight NJCAA Division I title. The only blemish all season for head coach Doug Chance and assistants Zack Sigler, Jeff Filali and Matt Sanders was a 6-5 loss on May 7 to Seward County in the Region VI Tournament.

Butler had won 50 straight games to that point in the season, and 88 straight since their last loss — a 4-2 defeat at Barton in the first game of a Kansas Jayhawk Community College Conference contest on March 3, 2016.

Florida SouthWestern State won three elimination games on May 19 at the NJCAA Division I Championship, but lost 3-1 the following day to national runner-up Salt Lake Community College to end its season at 66-7. Head coach Robert Iamurri and assistants Karla Powell and Kellie Quarles led the Buccaneers to win streaks of 10, 14 and 33 games this season to help garner South Region honors.

San Jacinto-South earned East Region recognition on the strength of a 43-21 record. Under the guidance of head coach Kelly Saenz and assistants Kelsey Walters and Selena Reyna, the Coyotes reached the third round of the NJCAA Division I Tournament, losing to Florida SouthWestern State.

The NFCA NJCAA Division I National Coaching Staff of the Year will be announced on June 9.