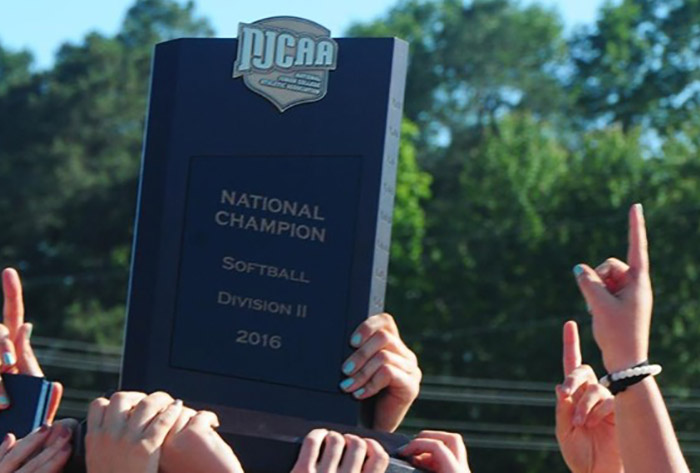 CLINTON, Miss. – Powered by four home runs, LSU Eunice (La.) won the 2016 NJCAA DII Softball championship with a 12-4 victory over Jones County on Saturday evening at Traceway Park. It marks the fourth national title in five years for the Bengals (57-8), with previous titles coming in 2011, 2013 and 2014.

Rebecca Skains recorded two of those long balls and finished 2-for-4 with four RBI and two runs scored. Jeannemarie Angelle was 3-for-4 with a home run, two RBI and three runs scored for the the Bengals.

In the title tilt, Jones County jumped out to a 1-0 lead in the first as Cory McCrary pushed Kalyn Watts across for the first run of the game.

The Bengals responded quickly with two runs in the top the of the second thanks to an RBI single from Jordan Hartman and a run-scoring double from Jaci Lavigne.

The bats continued to heat up for LSU Eunice as Rebecca Skains opened the third with a solo homer and Molly Wilson launched a three-run long ball for a 6-1 advantage. The Bobcats (50-8) trimmed the lead to 6-4 in the bottom half of the inning off a Kelly Byrd three-run home run.

LSU Eunice added a run in the fourth, before tacking on five more in the sixth to push its margin to 12-4, with round trippers off the bats of Skains and Angelle to secure the win.

Abigail Leonards was credited with the win as she tossed 4.2 innings and surrendered four runs on five hits, while Jordan Dougherty closed out the contest with three strikeouts.

A deciding game was necessary as the Bobcats forced the “if game” with a 9-0 win. In the opener, the Bobcats benefitted from timely hitting and a solid pitching performance from Amanda Holliday, who struck out four and scattered eight hits en route to Jones County getting the win to force an extra game.