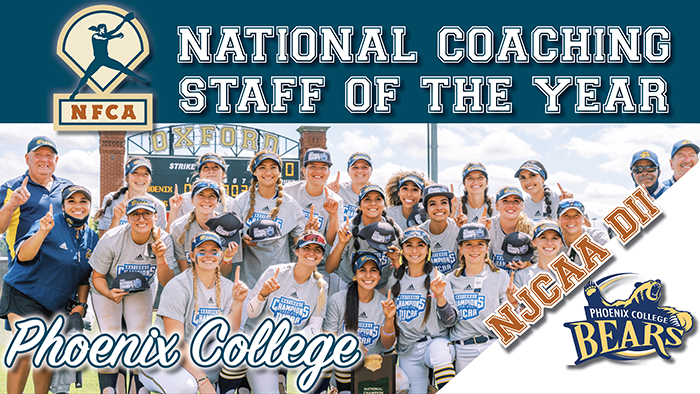 LOUISVILLE, Ky. – For its run to a national title, Phoenix College was named 2021 NFCA NJCAA DII National Coaching Staff of the Year.

Head coach Heinz Mueller, assistant coach Alyssa Fernandez, along with volunteer assistants Mike Grimaldi and Elvis Richardson steered the Bears to the program’s ninth national championship, first since 2012. The Bears finished 44-1 and held firm to the NJCAA DII’s top spot all season. After dropping its third game of 2021, Phoenix College won its final 42 contests of the season. The Bears completed an undefeated run through Arizona Community College Athletic Conference and Region I play.

Mueller, who will be inducted into the NFCA Hall of Fame in December, has been at the helm of Phoenix College for 30 seasons. Along with the nine national titles, Mueller is the active winningest coach in NJCAA softball with 1464 victories.