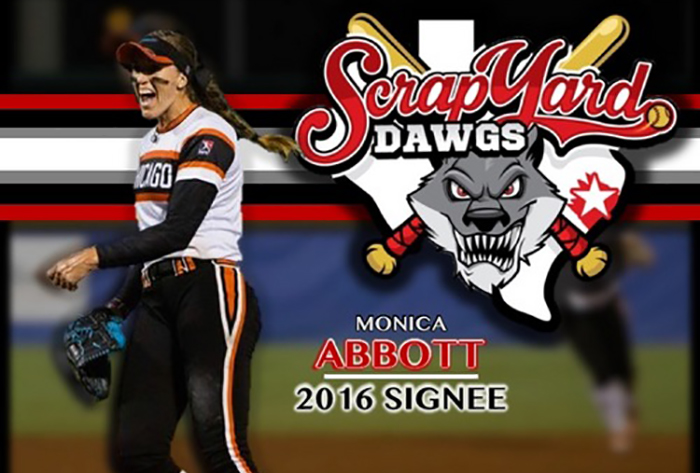 THE WOODLANDS, Texas – The Scrap Yard Dawgs General Manager Connie May announced today that the Dawgs have signed Monica Abbott to a six-year contract, expected to pay her $1 million. It is the first million-dollar contract in the history of the NPF and  be the largest paid by an individual American professional franchise to an active female athlete in team sports.

“I am thrilled to be able to help lead the Scrap Yard Dawgs in the NPF this year,” said Abbott. “It is an incredible honor to represent a first class organization and I look forward to finishing out my career there over the next 6 years and helping make the Scrap Yard Dawgs a household name in the local, national, and international community.”

Abbott, the six-foot-three Santa Cruz, California native, is moving into her ninth season in the NPF. Drafted to the Washington Glory in 2007 where she had a stand out rookie season and lead the Glory to their first and only Cowles Cup Championship. In her first professional career appearance she threw a complete game where she struck out 18 batters. Over three starts with Washington she struck out 37 batters and finished with a 2-0 mark, as well as being named Playoff MVP in her rookie season.

After her stellar rookie campaign, Abbott took a year off from the NPF to play in the 2008 Olympics in Beijing. Team USA came away with a Silver Medal in 2008 and Abbott threw the first ever perfect game in Olympic history against the Netherlands. Following the Olympics in 2010, Abbott helped Team USA go on to become World Championship Gold Medalists as well as World Cup Champions. Along with winning Team USA Gold in 2010, Abbott had a stand out season in the Japan Softball League with Toyota where they were the All Japan Tournament Champions as well as League Champions. Monica led the league in both strikeouts and ERA, was named Japan Softball League MVP, and threw a perfect game in the Final to win the championship. She went on to help Toyota win the League Championship three more times in 2011, 2012 and 2013 and was also named league MVP two more times in 2011 and 2012.

Abbott continued to be a force in the circle in her NPF career where in 2011 she was named NPF Pitcher of the Year and NPF Championship MVP with the Chicago Bandits. She posted a career-high 14:1 strikeout to walk ratio during the season and pitched all but four innings of the Bandits playoff run en route to the team winning the 2011 Cowles Cup Championship.

Prior to entering the Pros, Abbott shattered records in the NCAA during her four years at the University of Tennessee (2003-2007). She was a four time NFCA First Team All-American, a four-time All-SEC Selection, and the only three-time SEC Pitcher of the Year in history. In 2004 she was named SEC Freshman of the Year and then as a senior in 2007 she was named the USA Softball Collegiate Player of the Year. In addition to these awards, Abbott holds NCAA Division 1 records for career strikeouts (2,440), wins (189), shutouts (112), appearances (253) and single-season strikeouts (724).

“We are very excited to have the number one pitcher in the world in Houston for the next six years,” said GM Connie May. “We have worked very hard to put a solid team on the field and Monica will be the final piece to this puzzle to give us the best opportunity to compete for the Cowles Cup in our inaugural season.”

-- Courtesy of the NPF and Scrap Yard Dogs