Akron Racer AJ Andrews to be honored by Cleveland Indians 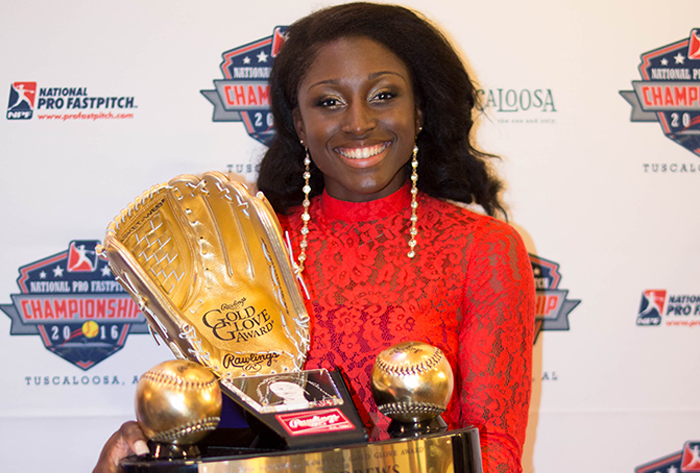 Akron, Ohio- The recognition and celebration continues on for Akron Racers

right fielder A.J. Andrews. Last month Andrews made history at the annual NPF Awards Banquet, becoming the first woman to win a Rawlings Gold Glove Award in the award’s 59-year history. Every year since 1957 the Gold Glove has been awarded to the best defensive player at each position in Major League Baseball’s American and National League.

A season’s worth of highlight reel catches, in which she routinely soared over fences, crashed through them or sacrificed her body on diving grabs, and many more years of hard work led to the groundbreaking achievement for Andrews.

“I’m really excited to get acknowledged for (my hard work),” Andrews told the crowd at the NPF Championship Series, when she was presented with the Gold Glove. “It’s really, truly an honor and a blessing. I can’t thank everyone enough for this opportunity.”

Next week, Andrews will return to Northeast Ohio to continue the celebration. On Monday, September 19, the Racers will host a reception in Andrews’ honor in the Summit County Softball Hall of Fame from 7:00 p.m. to 8:30 p.m. The reception is free and open to the public.

On the next night (Tuesday, September 20), the Racers’ MLB neighbors to the north will also recognize the landmark moment. The Cleveland Indians will take time to recognize Andrews before their game with division-rival Kansas City Royals, the reigning World Series champions, in a pre-game ceremony. The ceremony will precede the game’s 7:10 p.m. first pitch. The Indians currently boast the American League’s second best record as Cleveland looks to make the postseason for the first time since 2013.

Tickets for Tuesday’s game are available on the Indians’ website at indians.mlb.com

or by visiting the Progressive Field Ticket Office.